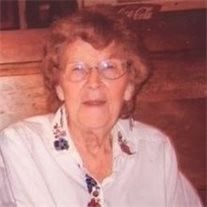 Norma LaVerna (Dishman) Davis July 14, 1933 – February 17, 2018 Norma LaVerna (Dishman) Davis was born in Blaine County, Nebraska to Archie and Bessa (Godfrey) Dishman on July 14, 1933. She was the fifth of six children born to the family. They relocated to a ranch in southern Brown County, where her father labored building a sod house and worked as a plaster mason and her mother taught school at area country schools. The family resided in the "old soddy" during her elementary school years. Norma started school at 4 years old and attended the one room District 34 country school. Several other Sandhill families, Crone, Donahoo, Einspahr, Hall, Williams, and Hartgrave attended school with the Dishman kids. The telling of the adventures of the Sandhill families was a favorite past time of Norma. When Norma went to High School they moved to Brewster where they owned the local Café. Norma graduated valedictorian from Brewster High School in 1950. Paul (Junior) Davis, and Norma were married November 12, 1950 in Ainsworth, Nebraska. They just celebrated their 67th wedding anniversary. They were blessed with three sons: Richard Dale, Micky Don, and Billy Joe and lived in Brown County until May 1973 when they moved to Ogallala, Nebraska. Many long time residents will remember Norma from the time she clerked for the "Dime Store" and later for the Grocery Store that became H & R. They lived in Ogallala for 12 years where they owned Hillcrest Furniture for eight years and then went to work for Nebraska Home Health as Resident Directors of Home for the Handicapped. For three years, they traveled and worked for Bethesda Care Centers meeting a host of friends and caring for lots of people. In July of 1988, Bethesda moved the Davis' to Springfield, Missouri where they managed the Meadows Water Company owned by Bethesda and then retired in 2002. They moved to Fort Davis, Texas where they resided until 2009 then returned home to Ainsworth until present. Norma's life was characterized as a hard-working sand-hills woman with a strong faith in God who loved to be surrounded by family and numerous friends. Her faith was evidenced by her loving care for the aged, mentally and physically challenged, and those needing a home. Norma is survived by her husband Paul Junior Davis, children, Mick Davis of O'Neill, Nebraska and Billy Joe and Nancy Davis of Fort Davis, Texas. Her grandchildren, Joshua and Dacia Davis, Brady and Miechelle Davis, Amos and Paula Davis, and Duffy and Catie Davis. Holly (Davis) McWatters and husband David, Lacy Davis and Aiga Pedro. 17 Great Grandchildren: Jordan Dean, Chandra, Micah, Isaiah, Josiah, Janaya, and Alexia Davis, Madison, Caleb, Abbygail, Jadon Davis, Malachi, Eli, Peter Davis, Kinslyn Davis, Liam and Kieran McWatters. Brother Dale and wife Evelyn Dishman, brother-in-law Harry Johnston, sister-in-law Mina Dishman, brother-in-law and sister-in-law Chet and Marjorie Wilkins, Gary Wayne and Edna Mae Davis, and a host of nephews and nieces also survive Norma. She was preceded in death by her parents, two brothers Don "Boone" Dishman, Bob Dishman, and two sisters Fona Hall and Naomi Johnston, son Richard Dale and great grandson A. J. Davis Let Me Go When I come to the end of the road And the sun has set for me, I want no rites in a gloom-filled room, Why cry for a soul set free? Miss me a little, but not too long, And not with your head bowed low, Remember the love that we once shared. Miss me but let me go, For this journey that we all must take And each must go alone. It's all a part of the Master's plan, A step on the road to home. When you are lonely and sick of heart Go to the friends we know, And bury your sorrow in doing good deeds. Miss me, but let me go. From the wife of her husband and the mother of her family God Bless you all and remember Me Funeral services for were held at Hoch Funeral Home in Ainsworth with Pastor Gary Graesser officiating the service. Music was provided by Nancy Davis. Special music selections of "What A Day That Will Be" and "Just Over In The Glory Land" were provided by the Davis family. A poem entitled "She Sleeps With Her Boots On" was read by grandson, Josh Davis. Casket bearers were, Joshua Davis, Brady Davis, Amos Davis, Duffy Davis,David McWatters, and Aliioaiga "Aiga" Pedro. Honorary Bearers were Norma's Granddaughters, Grand-Daughters-in-law, and Great-Grandchildren. Burial followed at the Ainsworth Cemetery. Memorials are suggested to the family of a future designation.

The family of Mrs. Norma L. (Dishman) Davis created this Life Tributes page to make it easy to share your memories.