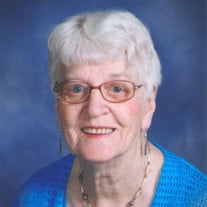 Nettie M Radden Ross, a long-time resident of Springview, Nebraska, died peacefully on March 12, 2020, at the age of 103, while at the home of her grandson in Hope Mills, North Carolina. For the last two years, Nettie had been lovingly cared for there by her great-grandson, Cory Tuton. Nettie was born on February 4, 1917, to George Radden and Caroline Duncker Radden in South Sioux City, Nebraska. She lived in Wyoming and South Dakota before her family moved to Springview in 1931. Nettie attended 8th grade there and was a graduate of KPHS, class of 1936. She was very proud of her school and attended every alumni banquet until a few years ago. She married Lee Ross shortly after graduation on June 5, 1936, and they lived 72 happy years in Springview, enjoying their many friends and neighbors. When Lee retired from his garage business and mail route, they took their RV to Arizona and spent several wonderful winters there with family and new friends. Lee and Nettie loved traveling and went to both coasts, Canada and Mexico. Nettie was very close to her siblings and although they lived far apart, they often vacationed together. Yellowstone Park was a favorite spot for camping and fishing. Nettie was a loving, devoted daughter, wife, and mother. She was an excellent cook and took pleasure in decorating her home with photos and mementos from friends and relatives, and she cherished the Methodist Church family, taking part in many church activities. She was a good sport, who enjoyed trading stories with friends. She loved to sing and listen to music and sang in the church choir for several years. Her hobbies were scrapbooks, photo albums, reading,, and art, as well as music. She began oil painting in Yuma and enjoyed that hobby for several years, giving many pictures to family and friends. Lee and Nettie enjoyed biking with the 'bicycle built for two' that Lee had constructed. Nettie was pre-deceased by her husband, Lee Ross; her daughter Glenda Ross Tuton; her brothers, Stan Radden and Warren Radden; and her sister, Georgia Radden Foreman. She is survived by her daughter, Lorraine Ross Hall; her sister, Lorraine Radden Clopton; her grandchildren Jeff (Linda) Tuton, David (Yvonne) Tuton, Lori Tuton (Bob Forbes), her grandchildren, and a multitude of nieces and nephews. Funeral Services were held on Saturday, May 30, 2020 at the United Methodist Church of Springview with Pastors Jenice Epp officiating at the service. Music was played by Ricky Nelson. Songs played: “How Great Thou Art", "He Touched Me" and "Amazing Grace”. Casketbearers were: Jeff Tuton, David Tuton, Bruce Ferguson, Joe Caulfield, Jim Ripley, Russ Heerten. Burial was in the Mt. Hope Cemetery in Springview under the direction of the Hoch Funeral Home of Ainsworth. Memorials were suggested in her name to the Springview Senior Center or the United Methodist Church of Springview.

Nettie M Radden Ross, a long-time resident of Springview, Nebraska, died peacefully on March 12, 2020, at the age of 103, while at the home of her grandson in Hope Mills, North Carolina. For the last two years, Nettie had been lovingly cared... View Obituary & Service Information

The family of Nettie M. (Radden) Ross created this Life Tributes page to make it easy to share your memories.