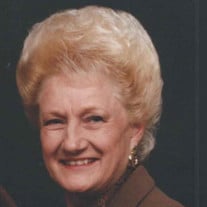 Neola Bode Anderson was born on August 25, 1924 at Ainsworth, Nebraska to Lee and Arlie (Keech) Anderson. She enjoyed being part of a large family with three brothers, Neil, Bub, and Wayne and three sisters, Doris, Ione, and Lucille. Bode grew up on a ranch 18 miles outside of Ainsworth. The siblings grew up with horses and would use the water tanks as make shift swimming pools. The water tanks were a little crowded for all of them, and as a child, Bode nearly drowned, which made her fearful of water the rest of her life. Once married with a family of her own, and interested in having a great time, and being family oriented, and living in a warm climate made Bode agreeable to having a ski boat and spending family weekends at Elephant Butte Lake in New Mexico. Her “telltale white ski belt” indicated she never overcame her fear of water but did not let a little thing like a “near drowning” come before giving her family great outings. Bode met Raymond Sorey at the county fair and they were married on November 10, 1942. Raymond was sent to Fort Hood Texas for basic training shortly after the wedding. Bode’s father drove her to the train station for her journey to Texas. This was quite a journey for someone of Bode’s young age. Basic training completed, a 10 day furlough, and the newly married Raymond was deployed to Belgium for WWII. During Raymond’s deployment Bode returned to her home state, and lived in Bassett, Nebraska and worked at the local pharmacy. After the war in Europe ended and the soldiers arrived in the United States, it was Indiana where they were stationed. Bode uprooted herself once again and moved to Indiana to be with her husband, anxiously awaiting his discharge orders. (The possibility of orders to California to prepare for a deployment to Japan did not materialize.) It might have made a completely different “rest of the story” for both Ray and Bode and their children had they ended up in California. During their time in Indiana Sandy Rae, their first daughter, was born. After Raymond’s discharge they returned to Bassett, rented a small house south of town, and spent a cold winter huddling around the stove. They raised cattle that first year. After a long, cold winter Raymond found a job with the forestry service in Idaho. They packed up baby Sandy, their belongings and headed for Idaho. Not quite yet at their destination, they ran out of money in Sheridan, Wyoming, and they stayed. Raymond got a job at the local lumber yard. Bode and Ray had two more children while in Sheridan; Susan and then Steve. Hearing about a position in the VA hospital in South Dakota, in Bode’s own words, “then before you knew it we were off.” Their move to Fort Mead, South Dakota, was just outside the infamous motorcycle destination town of Sturgis, South Dakota. When the motorcycles started showing up in Sturgis, husbands came home and warned their wives not to go shopping in Sturgis as “those wild ones from California were there.” Not deterred by a few motorcycle riding men, Bode went in to town for her Saturday grocery shopping and took a drive down to the main street. Her memory of this was “the motorcycles were lined up and down the middle of the main street, three deep.” Some years later they moved to Roseberg, Oregon for another position in a VA hospital. Oregon was not one of Bode’s favorite places to live. Shortly before they moved there, a fuel tanker had exploded on main street damaging businesses and the schools in their district. Her children subsequently had a long bus ride to school. The Umpqua River was not a safe place for children but since “the apple does not fall far from the tree,” Bode’s children did not heed the advice to “steer clear” and went to watch boys swing on a rope. In 1961 they took a short trip to Disneyland, California, and then settled into the new job with the VA system in Albuquerque, New Mexico where they raised their children. While in Albuquerque Bode was very involved in her children’s lives and of course a member of the PTA leading the effort to raise money for a new Library at Emerson Elementary School. In 1979 they retired and moved back to Nebraska, purchasing a home just south of Long Pine, Nebraska on 15 acres, they returned to Midwest roots. They spent many years riding horses by day and dancing in the evenings. Her life was full of fun and she thoroughly enjoyed her children, grandchildren, great-grandchildren, and great-great-grandchildren. There are so many great stories that made Bode special, all you had to do is ask. Bode left this world from Rock County Hospital Long Term Care in Bassett, Nebraska on October 15, 2018. She is preceded in death by her parents; husband, Raymond, her 3 brothers, Neil, Bub, and Wayne, and 2 sisters, Ione and Lucille, and her daughter, Susan. She is survived by her daughter Sandy Lambley (Craig) of Akron, Colorado, her and son Steve Sorey (Nancy) of Incline Village, Nevada; son-in-law, John Owens of Sante Fe, New Mexico;and her sister Doris Hughes of Ainsworth. She is also survived by five grandchildren Stacey Aldag, Kim Preston, Brigham Lambley, Alexander Sorey, and Tyler Sorey. Her eight great-grandchildren include Jay Aldag, Travis Aldag, Kendra Nickeson, Alex Aldag, Skye Aldag, Bea Preston, Sophie Preston, and Callan Lambley, and her nine great-great-grandchildren, loving in-laws, nieces, and nephews and a host of longtime friends. Graveside services were held on October 20, 2018 in the Grandview Cemetery at Long Pine, Nebraska with Pastor Bruce Beebout officiating at the service. Pallbearers were family and friends of Bode, including Steve Sorey, Alexander Aldag, Nic Schott, Dave Garrison, Dan Zwiebel, and John Gross.. In lieu of flowers memorials were suggested to the Ainsworth Fire Department. Hoch Funeral Home of Ainsworth was in charge of the arrangements.

Neola Bode Anderson was born on August 25, 1924 at Ainsworth, Nebraska to Lee and Arlie (Keech) Anderson. She enjoyed being part of a large family with three brothers, Neil, Bub, and Wayne and three sisters, Doris, Ione, and Lucille. Bode... View Obituary & Service Information

The family of Mrs. Neola B. "Bode" Sorey created this Life Tributes page to make it easy to share your memories.