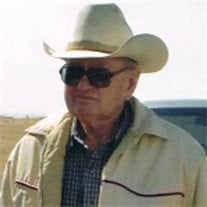 Neil Edward Anderson was born on March 11, 1927 to Lee and Arlie (Keech) Anderson in Ainsworth, Nebraska. He was one of seven children. Neil grew up in Rock County where he always loved working with cattle, horses, and putting up hay. He went to a country school in Rock County and graduated in 1940 from the 8th grade. He then went to work with his dad on the ranch, and worked there until he was inducted into the Army in May of 1946. Neil did his basic training in Kentucky, and then was shipped out of California to Japan where he was a mechanic and truck driver, building roads in very cold conditions. He received an honorable discharge in June of 1947. He met the love of his life Garnet Dye and they were married in October of 1947 and were blessed with two sons, Rick and Rex. Neil and Garnet lived south of Bassett until the school closed and then moved into town in 1963 and lived there for 10 years through high school. They then bought a small place south of Long Pine, Nebraska in 1972 and in 1973 moved into Long Pine. Neil enjoyed his grandkids and great grandkids and all their activities they were in. He enjoyed rodeos, country music, dancing, card-playing and visiting many area sales. Neil passed away on February 18, 2014 at the Rock County Hospital at the age of 86. Neil is preceded in death by his parents, 2 brothers, 2 sisters, and his wife Garnet. He is survived by sons, Rick and Ione Anderson of Bassett, and Rex and Rosie Anderson of Elm Creek, Nebraska; four grandchildren and nine great-grandchildren; two sisters, Bode Sorey and Doris Hughes both of Ainsworth, along with nieces, nephews and cousins. Graveside services were held on Friday, February 21, 2014 at the Grandview Cemetery in Long Pine, Nebraska with Pastor Gary Graesser officiating over the service. Honorary bearers were, Jason Anderson, Travis Anderson, Justin Anderson, Colby Roach, Dan Dailey and Dustin Dailey. Military Honors were given by the Bassett American Legion Post # 123 and taps were provided by Daniel Mizner. Hoch Funeral Home of Ainsworth was in charge of the arrangements.

Neil Edward Anderson was born on March 11, 1927 to Lee and Arlie (Keech) Anderson in Ainsworth, Nebraska. He was one of seven children. Neil grew up in Rock County where he always loved working with cattle, horses, and putting up hay. He went... View Obituary & Service Information

The family of Mr. Neil E Anderson created this Life Tributes page to make it easy to share your memories.