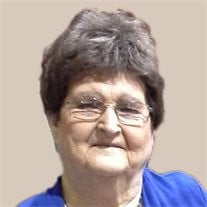 Nedra M. Norton was born on February 6, 1937 at O'Neill Nebraska to Pete and Gula (Myer) Weber and passed from this life at her home in Ainsworth, Nebraska on July 20, 2014 at the age of 77 years, 5 months and 14 days. Nedra went to school in Central Nebraska and South Dakota. She graduated from Stuart, Nebraska, where she met and married Raymond Norton on May 28, 1956 in Atkinson, Nebraska. To this union were born 4 children; Robert, Marcia, Todd, and Michael. They lived most of their lives in Brown County. Nedra was a rancher's wife, and also worked as a Brown County Sheriff Dispatcher and Deputy for 30 years. Nedra was preceded in death by her parents, step-father, sisters, Phyllis Christenson and Susan Cassidy, as well as a brother, Billie. She is survived by, her husband Raymond of Ainsworth, her 4 children, Robert Norton and wife Janet of Valentine, Nebraska, Marcia Menish and her husband Scott of O'Neill, Nebraska, Todd Norton and wife Cindy of Ainsworth and Michael Norton and wife Jeanie all of Ainsworth. 8 Grandchildren, Travis Menish and wife Mindy, of Blencoe, Iowa, Amanda Lindquist and husband David of Cameron, Missouri, Bradie Dillon and husband Cody of Long Pine, Nebraska, Casey Norton and his wife Kayla of Mills, Nebraska, Missy Neidhardt and husband Joey of Albion, Nebraska, Christopher Norton and his wife Randy of Norman, Oklahoma, and Ashley Norton and special friend Byron Thompson of Holdrege, Nebraska and Banning Norton of Ainsworth, along with 10 great-grandchildren, (and 2 great-grandchildren on the way.) Sister, Deanna Cornish of Long Pine, Nebraska and step-brothers, Ray Fairbanks of Hume, Missouri, and George Fairbanks Jr. and wife Delpha of White River, South Dakota; brother-in-law, Jim Cassedy of Washington, and nieces, nephews and other family members. Memorial services were held on Friday, July 25, 2014 at Hoch Funeral Home in Ainsworth, Nebraska. Brad Dugan officiated the service. Inurnment will be held at a later date. Memorials were directed to the family in her name.

Nedra M. Norton was born on February 6, 1937 at O'Neill Nebraska to Pete and Gula (Myer) Weber and passed from this life at her home in Ainsworth, Nebraska on July 20, 2014 at the age of 77 years, 5 months and 14 days. Nedra went to school in... View Obituary & Service Information

The family of Mrs. Nedra M. (Weber) Norton created this Life Tributes page to make it easy to share your memories.