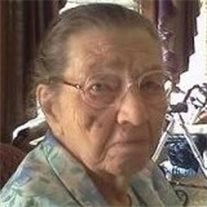 Naoma Monzell (Spencer) Polen, 96 years, of Fremont, Nebraska died Tuesday, September 10, 2013 at Arbor Manor in Fremont. Naoma was born October 31, 1916 in her Grandmother King's house in Blockton, Iowa to William Morris & Flossie Pauline (King) Spencer. Naoma graduated from Valentine High School in 1935 and taught in a country school for a year. She was united in marriage to Walter Harry "Buck" Polen on December 23, 1935 in Winner, South Dakota. They were the parents of 6 children, Harriett Ann, Walter Harry, Jr., Albert Morris, Lavonne Pauline, Marlowe Merritt and Dewey Kerwin. Naoma and Buck met Jesus for themselves and professed in 1949. Naoma and Buck lived on a farm east of Valentine until the fall of 1947. They moved to Springview that fall and in 1951 they moved to Bassett, Nebraska. Naoma got her first experience working in the Range Cafe, as a fry cook. She also cooked at the Sale Barn Cafe and the Kozy Cafe. When the Sandhill Implement built its new facility four miles west of Bassett, they included an area and facilities for a small restaurant and found one of the best cooks in town to manage it - Naoma. She was there cooking with the help of her daughter, Vonnie, until she was forced to retire after a car accident in June of 1993. Buck died in July of 1977. In February of 2006, Naoma and Vonnie moved to the Saunders House at Wahoo and then to Orchard Gardens in Valley, Nebraska. When Naoma's health started to fail in 2012, she moved to Arbor Manor in Fremont. Naoma was a tomboy while growing up and her favorite thing was to ride horses. She loved to read and always had a book (rather lots of books) at her side, she loved playing Scrabble and worked every crossword puzzle she could get her hands on. She crocheted, knitted and sewed, and her grandchildren and great grandchildren, each received something special she made. Naoma is survived by her sons, Albert Polen of Long Pine, NE, Marlowe and wife, Phyllis Polen of Cedar Bluffs, NE; daughter, Lavonne Polen of Fremont; daughter-in-law, Barbara Polen of Loup City, NE; son-in-law, Lowell Peterson of York, NE; 29 grandchildren, 53 great grandchildren and 29 great great grandchildren; sister, Dorothy Davis of Bassett; and half-sister, Beverly Paxton of Idaho; sister-in-law, Mabel Braun of Atkinson and a host of nieces, nephews and friends. She was preceded in death by her parents; husband; daughter, Harriett Peterson ; her sons, Dewey Polen and Walter Polen, Jr.; grandsons, Kevin Peterson and Keith Polen; daughter-in-law, Jan Polen; sister, Fern Rama; half-sisters, Joyce(Spencer)Merchen and Betty Ann (Shepard)Balfany; half brother, Bob Shepard; and sisters-in-law, Alice McAndrew and Margie VonHeeder. Funeral services were held at 10:30 AM, on Saturday, September 14th at Hoch Funeral Home in Ainsworth. Stanley Morrison officiated, as well as Darla Fisher and Joyce Tuttle assisting with the service. Music was provided by Darla Fisher, Joyce Tuttle and Loren and Laurel Appleman. Pallbearers were LaRon Peterson, Mark Peterson, Tom Polen, Phillip Polen, Robert Polen and Adam Polen. Honorary bearers were all of Naoma's grandchildren. Visitations were held on Thursday at Moser Memorial Chapel in Fremont and on Saturday at the Hoch Funeral Home prior to service time. Burial was held at the Bassett Memorial Park Cemetery in Bassett. Memorials were suggested to the family for a fund yet to be established.

The family of Mrs. Naoma M. (Spencer) Polen created this Life Tributes page to make it easy to share your memories.