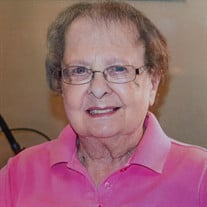 Nancy Sue (Orsborn) Gable, formerly of Long Pine Nebraska, passed away on January 8, 2021 at Good Samaritan Society Village in Loveland, Colorado, 21 days shy of her 90th birthday. Nancy was born in Ft. Wayne, Indiana on January 29, 1931 as the 2nd child of Ingrid Arline (Challgren) Orsborn and Forrest Maynard “Monte” Orsborn. She would tell a story about taking a train out of town with her older sister Lee (without telling her parents) because they wanted to see some chickens. At the age of seven her family moved to Denver, Colorado where her father worked for General Electric Company as a manager of the Apparatus Sales Division in the Rocky Mountain District. She loved the mountains and took up skiing. In the 40’s she often rode the Ski Train from Denver’s Union Station to Winter Park. She talked about going through the tunnels (31 of them) and having to cover her head due to the dirt that would seep into the train cars while underground. She could be found on some of the most difficult slopes making turns with the guys. During WWII she was a member of the AWVS (American Women’s Voluntary Services) and said her “war effort” was working in an office stuffing envelopes and rolling bandages. Nancy graduated from Denver East High School in 1949. She married Joe Jankovsky and they lived in Denver and Summit County. They divorced in 1958. Nancy was crowned Aspen’s Winterskol Festival Queen in 1958; this festival and the crowning of royalty is still held every year in Aspen. She frequently led guided horseback mountain camping trips. In the winter of 1959 Nancy was working in the office at Arapaho Basin ski area and met the Love of her Life Richard H Gable who had moved to Colorado to build the Dillon Dam with the ARMY Corp of Engineers and ran the ski rental shop at A-Basin during the winter months. Nancy and Rick married on May 31, 1963 and eventually moved from their mountain A-frame in Frisco to a home in Denver. She worked as a Comptometrist at Security Life in downtown Denver. With great joy in November 1967 they adopted their son, Matthew Hampton, and in December 1969 adopted daughter Andra Leigh ‘Annie’. In 1972 they moved to Rick’s hometown of Long Pine, NE, where she became the financial guru & bookkeeper extraordinaire for their company, Gable Excavating. Nancy enjoyed tubing down Pine Creek in Hidden Paradise and fondly mentioned it often. They bought a dilapidated cabin on the Pine Creek rapids in the late 70’s and completely remodeled it. Now known as the Sycamore, it was a family highlight and many lasting memories were created there. She looked forward to her twice-yearly visits to see siblings Cincy, Lee & Stuart and many family members in Colorado. She enjoyed being involved in the community and volunteered with many organizations. She was a founding member of the Lamplighters Extension Club, LP Community Center, Long Pine Heritage Society, Heritage Thrift Shop, and started the Heritage Museum in the old Upstill Hotel/Luehrs Rooming House securing it in the National Register of Historic Places. She was involved with the Long Pine Methodist Church, Eastern Star and Sandhills Shrine Club & Auxiliary. In November 2015 Nancy returned to Colorado. She loved her apartment at Good Sam Loveland Village and had a great view of the Rocky Mountains. We know this brought back many good memories for her. She missed her friends in Nebraska, but believe she was "at home". She was "The" grammar master, a voracious proof-reader, crossword puzzle connoisseur, creative costume maker and never picked up a hobby she didn’t enjoy. Nancy was loving, kind, organized, a beauty-queen and a brave go-getter. She had a really good, dry sense of humor which surprised many folks. She thoroughly enjoyed her jigsaw puzzles. Her children cherished the "snow days' where she would set up the card table in the living room and break out the most challenging puzzles for the three of them to work on. She loved her husband deeply to his death in May of 2007 and they are now reunited in Heaven celebrating their true love for Eternity. Nancy had “The Good Life”! It was a full and amazing life! She will be missed by many and undoubtedly forgotten by few. She was preceded in death by her parents, sister Lura Lee and husband Richard. Nancy is survived by her son Matt Gable and fiance’ Amber of Lincoln NE and daughter Annie Fitzgerald and husband Randy of Windsor CO; 3 grandchildren Brody, Harper & Rylan; her sister Cynthia Nichol, brother Stuart Orsborn and many nieces and nephews. A Celebration of Life Event will be held Saturday, July 31, 2021 at 9:30 AM in the Grandview Cemetery at Long Pine. Randy Fitzgerald will officiate at the service. Music will be provided by Greg Votava, Chris Dittmar and Matt and Brody Gable. In lieu of flowers, memorial contributions can be made to the Long Pine Heritage Society & Heritage House Museum and the Brown County Community Foundation via https://www.nebcommfound.org/give/brown-county-community-foundation-fund/ See what the local “Brown County Community Foundation Fund” supports on Vimeo at https://vimeo.com/175850396. The family suggests those attending to wear casual attire involving bright and happy colors. Hoch Funeral Home is assisting with arrangements. To leave an online condolence, please visit www.hochfuneralhome.com.

The family of Nancy Sue (Orsborn) Gable created this Life Tributes page to make it easy to share your memories.