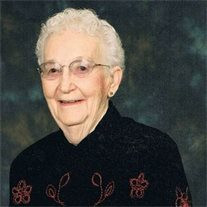 Myrtle B (Meyers, Dahlgren) Sears was born to Erwin and Maggie Mae Meyers on March 31, 1919 at Merriman, Nebraska. She was the youngest of seven children joining three brothers, Guy, Elwood and Roy, along with three sisters, Esther, Mildred and Ruth. Myrtle's mother passed away on July 23, 1920 and with the task of raising seven children her father enlisted the help of neighbors, Andrew and Elvetta Dahlgren. On May 10, 1921, Myrtle was adopted by the Dahlgren's and acquired another brother, Cecil. Myrtle spent her early years growing up in Cherry County. As a young child, in addition to helping with family chores, she spent time listening to baseball games on the radio with her Dad "Pop" and playing baseball at recess. This is where she developed her love for the game which she carried with her to the end. Being the avid Kansas City Royals fan, Myrtle would have enjoyed watching them win the World Series in 2015. On September 25, 1935, Myrtle was united in marriage with Redmond Sears in Rushville and they were blessed with five Sons; Rhett, Robert, Daniel, Ronald and Roger. They were ranchers of Angus cattle for many years on their ranch south of Merriman. Myrtle often accompanied Redmond to area stock shows and helped get the cows ready for "show". She was present and helped with the calves at the Chicago Stock Show in October 1957 and the Denver Stock Show in January 1958, where they won the title of Grand Champion for their pen. The winning pens were different calves but came from the same calf crop. In 1964 Myrtle and Redmond moved to Ainsworth to run the business they developed a couple years earlier. In the very beginning Myrtle helped weigh the silage trucks and then became the chief mail-carrier until she no longer drove. Ainsworth Feed Yards was a staple in the community for over 48 years and she enjoyed being a part of and seeing the expanding business every day. As retirement age approached Myrtle and Redmond took vacations to Hawaii, Texas and Arizona. On one of their trips they decided to make Arizona their home for the winter. Myrtle enjoyed her years in Arizona golfing, square dancing, and bowling. Just before her 88th birthday Myrtle moved to Cottonwood Villa and lived there until her passing on August 24, 2015. She enjoyed all the activities that Cottonwood Villa offered. You would often find her name at the top of the list when the residents played Wii bowling. Even at the age of 96, she still had the skills to throw strikes and get high scores. She was also proud of how many laps she walked through the halls in a day. Family was always important to Myrtle and she enjoyed the visits from those near and far. She was known for her potato salad, and a family gathering would not be complete without it. Myrtle was a quiet and gentle soul with the biggest heart and love for all. Myrtle was preceded in death by her natural parents Erwin and Maggie May Myers; adoptive parents, Andrew and Elvetta Dahlgren; four brothers, three sisters, and infant son Roger. She is survived by her sons, Rhett and wife Carol, Robert and wife Diana, Daniel and wife Barbara, Ronald and wife Gail; 13 grandchildren, 25 great-grandchildren and five great-great grandchildren, nieces and nephews. A Memorial Service was held on Saturday, May 28th, 2016 at 10:30 AM at Hoch Funeral Home in Ainsworth. Inurnment followed at the Ainsworth Cemetery. Music was provided by Bob and Duane Keim. Officiating the service was Pastor David Randall. Memorials were suggested to the family in her name.

Myrtle B (Meyers, Dahlgren) Sears was born to Erwin and Maggie Mae Meyers on March 31, 1919 at Merriman, Nebraska. She was the youngest of seven children joining three brothers, Guy, Elwood and Roy, along with three sisters, Esther, Mildred... View Obituary & Service Information

The family of Mrs Myrtle B. Sears created this Life Tributes page to make it easy to share your memories.

Myrtle B (Meyers, Dahlgren) Sears was born to Erwin and Maggie...