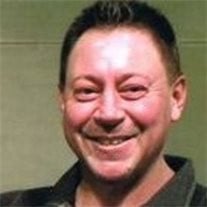 Monte Lyn Osborn was born February 16th, 1965 to Lois (Theiman) Osborn and Duane S Osborn. He departed this life on January 19th, 2018, at the age of 52. Monte was in born in O'Neill, NE and lived part of his childhood at his grandparents' farm, Northwest of Ainsworth. He attended Johnstown grade school and later Ainsworth Elementary. He graduated from Ainsworth High School in 1983. He then attended Denver Institute of Technology, graduating in 1985 with an Associates degree in CAD Design and Development. Monte worked for different companies in the Denver-metro area, designing blueprints for buildings, towers, etc. In 1988, he had a chance to travel to Saudi Arabia to teach native Saudis how to draw on the computer. After one year he came back to Denver, working for a short time. He had an opportunity to work for a company in Hawaii. After six years in Hawaii, he made his way back to the Denver area. He worked for his brother, Ed, at American Fabricators until he was hired by Eagle Span. He was very proud of his programming skills, and the fact that he could draw a large building, and compile every piece that was needed, down to the nuts and bolts. In 2009 he moved back to Long Pine, calling this area his home. He worked for various individuals, before gaining employment at Daniel's Manufacturing. Monte enjoyed singing karaoke with friends, fishing for walleye with his father, organizing building projects, and helping friends. While in Denver, he loved going up to the mountains to ski. One of his favorite places was camping along Long Pine Creek. Monte is preceded in death by his father: Duane Stewart Osborn; his grandparents: Helen and Steward Osborn and Ferd and Anna Thieman, his step-father: Paul Cavalli, and uncle: Fred Osborn. He is survived his by mother: Lois Osborn of Ainsworth, sister: Kim Bejot and Evan Evans of Ainsworth, brothers: Shawn Osborn and Wendy of Littleton, CO and Ed Osborn of Brighton, CO, Aunts and Uncles: Ann and John Arndt of Independence, MO and Sharon Osborn of Aurora, CO, many nieces, nephews and cousins.

Monte Lyn Osborn was born February 16th, 1965 to Lois (Theiman) Osborn and Duane S Osborn. He departed this life on January 19th, 2018, at the age of 52. Monte was in born in O'Neill, NE and lived part of his childhood at his grandparents'... View Obituary & Service Information

The family of Monte L. Osborn created this Life Tributes page to make it easy to share your memories.