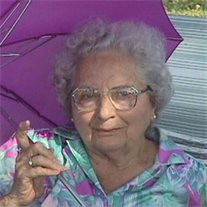 Miriam Louise (Byington) Davis was, born on the home place west of Riverview, Nebraska on May 11, 1917, and passed away on Monday, June 30, 2014, at the age of 97. Miriam was the oldest child of Marion and Nettie (Carter) Byington. She was raised in Keya Paha County, attending schools in both Keya Paha and Rock County, and graduated from Rock County High School in May 1936. Miriam married Clint Davis on May 19, 1936 and they had three children. Miriam worked with the public most of her life and her happiest years were spent managing the Sandhills Motel of Bassett, which she and Clint owned for sixteen years. She loved traveling, children, flowers, music and writing. Her family and home were her life. She is survived by her husband, Clint; children, Joy and husband, Lynn Zumbrunn of Hesperia , California, Judy and her husband Jack Johnson, of Bennet, Nebraska; eight grandchildren, their husbands and wives, twenty great-grandchildren and twelve great-great-grandchildren; four nieces and four nephews; her sister, Donna DeWeese of North Platte, Nebraska and brother, Garry Byington of North Port, Florida. She was preceded in death by her son, K.M. Davis; her daughter-in-law, Joyce Davis; sister-in-law, Rose Foster, brothers-in-law, Clem Foster and Max DeWeese; sister, Eunice Crotty, brother, Donald N. Byington, and niece, Candy Green. Funeral Services were held on Wednesday, July 2, 2014 at the Bassett United Methodist Church in Bassett, Nebraska with Pastor Rod Heilbrun officiating the service. Music arrangements were provided by JoAnn Swanson. CD selections of "The White Cliffs of Dover" by Kate Smith, "I Believe" by Jane Froman, and "May The Good Lord Bless And Keep You" by Jim Reeves were also provided, as well as congregational hymns of "Amazing Grace" and "How Great Thou Art." Casket bearers were, David Zumbrunn, Greg Zumbrunn, Timothy Johnson, Matthew Johnson, Robert Pokorny, Bob Rutherford, Jeff Geisert, and Andy Davis. Burial was held at the Bassett Memorial Park Cemetery under the direction of Hoch Funeral Homes of Bassett. Memorials were directed to the Bassett Volunteer Fire Department, the Bassett United Methodist Church, the Rock County Long Term Care, the American Legion Post #123, or to the Rock County Senior Center, in Mim's name.

Miriam Louise (Byington) Davis was, born on the home place west of Riverview, Nebraska on May 11, 1917, and passed away on Monday, June 30, 2014, at the age of 97. Miriam was the oldest child of Marion and Nettie (Carter) Byington. She was raised... View Obituary & Service Information

The family of Mrs. Miriam L. (Byington) "Mim" Davis created this Life Tributes page to make it easy to share your memories.