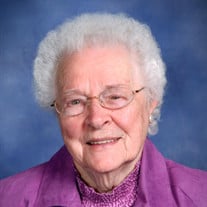 Miriam Phyllis Lambert was born March 11, 1917, to Kiah and Letha (Ingwerson) Lambert at her grandfather Ingwerson’s farm homestead near Springview in Keya Paha County, Nebraska, and she passed away at her home in Omaha, Nebraska, on November 21, 2019, at the age of 102 years, eight months and ten days. By the time she was five, Miriam had been joined by three younger siblings - Maurine, Max and Helen. The family remained in Springview for another 15 years - through the ‘great depression’ and long enough for Miriam and her siblings to form a very close bond with one another. Miriam graduated from Keya Paha County High School in 1934, continuing to work for local area merchants following graduation, and choosing to remain in Springview when the rest of her family migrated, first to Wyoming in 1937 and later to California. Miriam had attended country grade schools prior to entering KPHS, and during that time she and Armand Carr had developed a close friendship that continued even after they were both through school. Miriam and Armand were married on February 27, 1936, and after first considering a move to Wyoming, they decided that Springview would remain their home. One of the couple’s more difficult challenges was to provide a home for their growing family at a time when there was little or no opportunity. Their two children, Joanne and Harley, had been born during the depression and at the start of World War II, respectively, and it would be several more years before that opportunity would be present. So, as an alternative, the couple began making improvements to a small abandoned farmhouse in 1945, eventually transforming it into the place that their family would finally call ’home’. In 1951, with the Blizzard of ’49 still a recent memory, Joanne and Harley still in school, and more of their own business contacts in the community, Miriam and Armand decided that it was time to move both their family and the house that they had worked so hard at modernizing, the eight miles into Springview. Following that move, Miriam began employment with the school hot lunch program in a regular job that more than made up for any opportunity that might have been lost to the recession many years earlier. Grateful to accept that job opportunity to work with and around people she knew, Miriam continued her employment for another 26 years, retiring in 1979 and still ‘looking forward to completing some of her many other projects.’ Miriam was a quiet and unassuming mother and grandmother who, though always choosing to remain in the background, had a strength and determination that only those closest to her had the privilege of knowing. She loved any kind of music, and as a young girl would ride her pony five miles out and back to take piano lessons that were to become a part of her. Often recognized for her cinnamon rolls and homemade pies, Miriam was also known for having created and gifted to others such specialty projects as quilted bedspreads, crocheted tablecloths and on one occasion even a full-sized American flag. Miriam was a 60-year member of the United Methodist Church in Springview and had long been active in that Community’s affairs. Miriam is survived by her son, Harley (Sharon) of Omaha, Nebraska; her 101-year old sister, Maurine Baecher of Downey, California; her grandchildren, Bill Kirsh-Carr (Lauren), Dana Kennedy, Jeff Kennedy, Jason Kennedy (Anne); four great-grandsons, four great-granddaughters and two great-great grandsons; and Miriam’s nieces and nephews and other relatives. She was preceded in death by her parents; husband, Armand; sister, Helen; brother, Max; daughter. Joanne and husband Bruce Kennedy; infant grandchild, Kennedy; and great-grandson, Alexander Weckesser. Funeral Services were held Tuesday, December 3, 2019 at the United Methodist Church in Springview with Pastor Jenice Epp and Pastor Gary Graesser officiating at the service. Music was provided by Rick with him singing, “Take My Hand, Precious Lord” and the congregation singing “Softly and Tenderly, Jesus Is Calling,” “Children of the Heavenly Father” and “It Is Well With My Soul.” Casketbearers were: Bill Kirsh-Carr, Dylan Kirsh-Carr, Nicholas Kirsh-Carr, Jeff Kennedy, Andrew Kennedy and Jason Kennedy. Burial followed in the Mt. Hope Cemetery at Springview. In lieu of flowers, memorials were suggested to the Springview United Methodist Church in Miriam’s name. Condolences may be left on Hoch Funeral Home’s online guest book at www.hochfuneralhome.com.

Miriam Phyllis Lambert was born March 11, 1917, to Kiah and Letha (Ingwerson) Lambert at her grandfather Ingwerson&#8217;s farm homestead near Springview in Keya Paha County, Nebraska, and she passed away at her home in Omaha, Nebraska, on November... View Obituary & Service Information

The family of Mrs. Miriam P. (Lambert) Carr created this Life Tributes page to make it easy to share your memories.