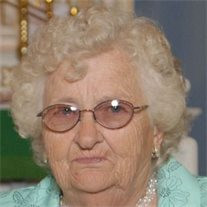 Mildred "Millie" J. Stewart was born on January 5, 1934 at her parents' home near Brocksburg, NE near Simpson Creek to Francis and Sadie (Steward) Haugen and passed away at Parkside Manor, Stuart, NE on May 5, 2014 at the age of 80. Millie graduated from Keya Paha High School in 1951. Following high school, she attended a business school in Chicago and worked there until returning to Nebraska to marry James "Jim" Stewart on June 1, 1955 at her parents' home. Millie and Jim put lots of miles on their car to go square dancing. Often when there were dances ranch work would be put on hold just to go. Ranching and raising a family was her life's passion. Whether it be fixing fence, feeding bucket calves, calving cows or feeding the pigs there was nothing she wasn't a part of. Millie really enjoyed gathering bulls out of the pastures. She had an old red hopper box pickup with a caker on it, and that was her chasing rig. It may not have had the best brakes or power steering but with her behind the wheel, the job got done. When the grandkids started coming along she couldn't wait to spoil them. Usually it would be a sucker or bowl of ice cream was the reward they got. She was also the chief canner too. Even when Millie would put in a full days work in the hayfield, she would spend most of the evening canning whatever produce from the garden that was ready to can. Millie was a member of Northern Lites Social Club for many years and was currently serving as Vice President of the club. Millie served many years on the Election Board in Kirkwood Precinct. Millie was preceded in death by her parents, Francis and Sadie; her husband, Jim who passed away in 1999; and a sister, Lenna Arter. She is survived by children Terry and wife Janet of Bassett, Dale and wife Janet of Newport, Mary and husband Neil Ammon of Newport, Donald and wife Sheila of Lincoln; eight grandchildren and one great granddaughter; brother Glenn Haugen and wife Eileen of Newport, brother in-law, L. Neal Stewart and wife Vera of Cochran, GA, nieces and nephews. Funeral Services were held on Friday, May 9, 2014 at the Newport Gymnasium in Newport, Nebraska, with Pastor Wayne Owens officiating over the service. Special CD selections of "The Old Rugged Cross" by Tennessee Ernie Ford, "When I Get Where I Am Going" by Brad Paisley, and "How Great Thou Art" by Connie Smith were played. A Eulogy was given by Sheila Stewart. Casketbearers were her grandchildren: Amber DeLancey, Aaron Ammon, Lucas Stewart, Ryan Stewart, Kendra Stewart, Clayton Stewart, Chase Stewart, and Carson Stewart. Honorary Casketbearers were the Northern Lites Social Club and all of Millie's other family and friends. In lieu of flowers, memorials were suggested to the Newport Fire Hall Building Fund or to the donor's choice. Burial was held at the Willowdale Cemetery near Newport under the direction of Hoch Funeral Home of Bassett.

Mildred "Millie" J. Stewart was born on January 5, 1934 at her parents' home near Brocksburg, NE near Simpson Creek to Francis and Sadie (Steward) Haugen and passed away at Parkside Manor, Stuart, NE on May 5, 2014 at the age of 80. Millie... View Obituary & Service Information

The family of Mrs. Mildred "Millie" (Haugen) Stewart created this Life Tributes page to make it easy to share your memories.