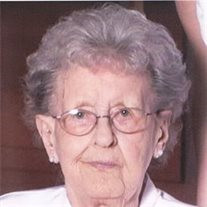 Mildred Irene "Irene" Sandall was born near Bassett, Rock County, Nebraska on August 13, 1924. She was the third child of five born to Theodore "Ted" and Zada (Dennis) Sandall. At this time they were living on the Donahue place (John Stec) northeast of Bassett. During Irene's childhood the family moved to several different places in the Bassett-Newport area which was common during the Depression Years. After Irene graduated from the eighth grade at the Plainview School north of Newport she worked for several households. One of which was in Lincoln, Nebraska for a short time, and another one was for Jim and Esther Cook at Mills, Nebraska. On June 26, 1948, she was united in marriage to Elmer Leroy Harlan at Ainsworth, Nebraska. They made their first home on the Bogue place southeast of Bassett where Mike and Trudy Nolles now live. They operated the ranch with Elmer's parents, Ora and Margaret (Brown) Harlan. They were living here when their first child Allen was born. In 1952 they and Elmer's parents rented and moved to the Leahy ranch which was further southeast of Bassett and owned by Dick Mauch. They were living here when their second and third children, Warren and Reta were born. In 1965 they rented and moved to the Wayne Peterson place on the west side of Pony Lake. In 1971 they purchased Elmer's grandfather's ranch, (James "Evans" Harlan) from his Aunt Irma (Harlan) and Ray Hirsch, then moved there in 1974. Elmer was diagnosed as having Chronic Lymphocytic Leukemia in 1981 so they purchased a home in Bassett; retired and moved there in 1983. Elmer and Irene were very dedicated to the Rock County Senior Center and they spent seventeen years cleaning and making minor repairs. Along in here Irene gradually lost her hearing and was using hearing aids. In about 1995 she had a cochlear implant. She could hear more things but still had a difficult time understanding what was said. This was very frustrating for her and others also. Later years she gave up on it and got along by being deaf. Elmer passed away on August 12, 2004. Irene continued to reside in her home in Bassett with in-home health care until she fell and broke her leg on June 21, 2007. She then resided at the Parkside Manor in Stuart, Nebraska for a short time, then moved to Rock County Long Term Care where she resided the rest of her life. She lived nearly eight years there giving the nurses a bad time! During her married life Irene had the most important job in the world being a homemaker and a loving wife, mother, grandmother, and great-grandmother, as well as being occasional helper to her husband such as helping milk the milk cows by hand. Irene went to be with her heavenly Father on March 21, 2015 at the Rock County Long Term Care at the age of 90 years, 7 months, and 8 days. She is survived by her children Allen Harlan and wife Rose of Bassett, Warren Harlan and wife Cheryl of Bassett, and Reta Freeman and husband Dennis of Ord, Nebraska; grandchildren Jenn Hanna, Rose Rowan and husband Brent, Duane Harlan, Angela Harlan, Brent Harlan and wife Alesia, Jennifer Rhodes and husband Brady, Jered Harlan and wife Whitney, Tina Simpson and husband Shawn, and Travis Freeman; eight great-grandchildren and one on the way; sister, Berdena Butler of Bassett; sisters-in-law Alta (Harlan) Simons of Woodburn, Oregon and Violet (Harlan) Sullivan of Estacada, Oregon; brothers-in-law James "Otis" Harlan and wife Nancy of Bassett, and Elmer Schwager of Springview, Nebraska; and nieces, nephews, and other family members. She is preceded in death by her parents Ted and Zada (Dennis) Sandall; husband Elmer Harlan; brothers Julian Sandall and wife Genevieve, and Donald Sandall and wife Betty; sister Ida Belle Vargason and husband Orval; brother-in-law, Gerald Butler; in-laws, Calvin and Ida Harlan, Esther Burgett-Weber and husbands Louie Burgett and Henry Weber, Levi and Eula Harlan, Neva Bussinger-Zillig and husbands Walter "Butch" Bussinger and Gene Zillig, Tom Simons, Gene Sullivan, and Helen Schwager. Funeral services were held on Saturday March 28, 2015 at the United Methodist Church in Bassett, Nebraska with Pastors Rod Heilbrun and Steve Matthews officiating over the service. Music was provided by Kristie Sybrant Keller singing "Heaven" and Dave Sybrant singing "Old Rugged Cross." The congregational selection was "A Hymn of Promise." Pallbearers were Irene's Grandsons Brent Harlan, Jered Harlan, Brady Rhodes, Shawn Simpson, Travis Freeman, Brent Rowan, and Duane Harlan. Honorary Bearers were Irene's granddaughters and great grandchildren. Special Reflections were given by Duane Harlan. Burial was in the Bassett Memorial Park Cemetery under the direction of Hoch Funeral Home of Bassett. Memorials were directed to the family in her name.

Mildred Irene "Irene" Sandall was born near Bassett, Rock County, Nebraska on August 13, 1924. She was the third child of five born to Theodore "Ted" and Zada (Dennis) Sandall. At this time they were living on the Donahue place (John Stec) northeast... View Obituary & Service Information

The family of Mildred Irene Harlan created this Life Tributes page to make it easy to share your memories.