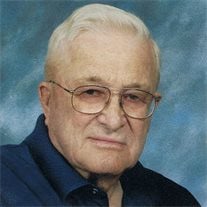 Milan LeRoy Nelson was born on June 11, 1919 in Tilden, Nebraska to Victor and Hallie (Cornet) Nelson and passed away on December 12, 2012 at the Antelope Memorial Hospital in Neligh, Nebraska. Milan's place of birth was in the house his dad built on the Madison County side of Main Street. He first attended a country school north of Oakdale, Nebraska, then attending the 3rd grade through the 11th grade in Oakdale. Milan along with his brother and father moved to Ainsworth following the death of his mother. Milan graduated from Ainsworth High School in 1937. On June 8, 1940, he married Wilda Jeanette Williamson, in the parsonage of the Ainsworth United Methodist Church. Devotion and prayer was how they started their days. Their first home was a 3 room house west of Ainsworth in an apple orchard. Milan worked for the Creamery in Ainsworth. Milan and Wilda then moved many, many times between Nebraska, Oregon and Idaho. During those years Roy was born in Grant Pass, Oregon. All four younger children, Lyle, Joyce, Norma and Joanne were born in Ainsworth. Milan entered the United States Navy in April of 1945. His Naval Boot training took place in the Chicago area, and he was then sent to California, preparing to be deployed to Japan, however the treaty was signed and Milan assisted returning service men to the United States, until being discharged in April of 1946. Milan's life long love of sports began when he played basketball, baseball and boxing in school and on town teams. He loved watching his son, daughters and grandchildren. He was an avid Nebraska fan. Milan was never late for a game, and never left a game early. College sports on TV were always special to him as well. Milan and Wilda moved to Bassett in the fall of 1955, where they started a dairy farm and delivered milk to homes and businesses of Bassett until the fall of 1958. Following this, they entered a partnership with son Roy, raising, yearling steers until 1968. They then moved to Plainview, Nebraska operating a Grade A Dairy farm, and later moved to Creighton to set up a sow/pig farming operation. Milan and Wilda retired in 1980, and moved to Missouri where they enjoyed fishing, and following the Southern Missouri State Lady Bears Basketball team. They camped at Treasure Lake in Branson, Missouri and enjoyed all the entertainment provided at Silver Dollar City. After a time in the hospital, 1992 the couple bought a travel trailer, traveling between Missouri, Texas, Alabama and Nebraska. They moved back to their home state of Nebraska to Fullerton in 2003, living there for 6 years before moving to Neligh. Milan and Wilda celebrated their 70th wedding anniversary in June of 2010 with family and friends. The couple enjoyed 72 &1/2 years of marriage. Milan was preceded in death by his parents, infant son Lyle, brother, Harlan, and granddaughter Terisa Nelson. He is survived by his loving wife Wilda of Neligh, Nebraska; Son, Harlan "Roy" (Patty) Nelson of Ainsworth; Daughters, Joyce Nelson & Ron McNally of Phenix City, Alabama, Norma (Phil) Horner of Henderson, Nevada, and Joanne Haberlan of Lincoln, Nebraska. 9 grandchildren and 21 great-grandchildren. Funeral Services were held on Saturday, December 15, 2012 with Pastor Gary Graesser officiating over the service. CD Selections of "Amazing Grace", "The Old Rugged Cross, & "How Great Thou Art" were offered as well as special music of "Just A Closer Walk With Thee" and "Somewhere Over The Rainbow." Pallbearers were John McNally, Jared Sanger, Rodney Nelson, Nathan Nelson, Ronnie Nelson, Rich Nelson and Tom Nelson. Burial was held at the Ainsworth Cemetery in Ainsworth, Nebraska. Hoch Funeral Home was in charge of the arrangements. Memorials were suggested to the Antelope Memorial Hospital Serenity Garden or to the Golden Living Center of Neligh, Nebraska.

Milan LeRoy Nelson was born on June 11, 1919 in Tilden, Nebraska to Victor and Hallie (Cornet) Nelson and passed away on December 12, 2012 at the Antelope Memorial Hospital in Neligh, Nebraska. Milan's place of birth was in the house his dad... View Obituary & Service Information

The family of Milan LeRoy Nelson created this Life Tributes page to make it easy to share your memories.