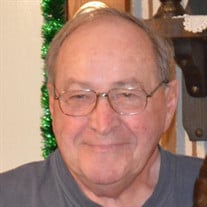 Michael Dean Witt, age 78, of Valentine, Nebraska passed away Wednesday, December 8, 2021, at the Cherry County Hospital in Valentine, after succumbing to an ongoing battle with cancer. Mike was born on October 19, 1943 in Ainsworth, Nebraska to Lloyd Daniel and Leona Belle (Case) Witt. In January of 1962 Mike joined the military, proudly serving his country in the US Navy and was honorably discharged in May of 1966 at Corpus Christi, Texas which included 6 months of extended service during the Cuban Missile Crisis. In August of 1962, Mike married his high school sweetheart and love of his life, Carole Marie Gilliland while home on leave. Following discharge, Mike worked for the State of Nebraska, Department of Roads for over 40 years first in Ainsworth and then transferring to Valentine in 1983. On December 26, 1975, they welcomed daughter Michelle Marie. He was preceded in death by his parents Lloyd and Leona Witt, twin sister Marcia Saults, and younger brother Gary Witt. Survivors include wife, Carole of Valentine; daughter, Michelle of Valentine; and grandchildren, Dylan, Daniel, and Peyton all of Valentine. Memorial Services were held on Saturday, December 18, 2021 at the Hoch Funeral Home in Ainsworth with Father Mike Wetovick as celebrant. The CD selections of “Beyond The Sunset” by Hank Williams and “If Jesus Comes Tomorrow” by Owen Mac were played. The Obituary was read by grandson, Dylan Witt with special memories given by Michelle Witt and Chuck Scholtes. Inurnment followed in the Ainsworth Cemetery with Military Honors conducted by the Ainsworth American Legion Post #79. Memorials were suggested to the family for future designation.

Michael Dean Witt, age 78, of Valentine, Nebraska passed away Wednesday, December 8, 2021, at the Cherry County Hospital in Valentine, after succumbing to an ongoing battle with cancer. Mike was born on October 19, 1943 in Ainsworth, Nebraska... View Obituary & Service Information

The family of Michael D. Witt created this Life Tributes page to make it easy to share your memories.