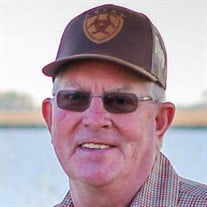 Michael Eugene Foster was born on December 12, 1956 to Wilber (Gene) and Laurel McCain Foster in Julesburg, CO. Mike’s family soon moved to Ericson, then Grand Island and Cozad before settling in Bassett in 1969. Mike graduated from Rock County High School in 1975. He loved all sports, but especially excelled at track, where he was the Nebraska state pole vault champion his senior year. Following graduation, Mike attended Northeast Community College completing an electrician degree. Mike was united in marriage to Jan Kinney on April 1, 1978. To this union, two children were born: Shelly and Brady. Mike was employed by KM Construction until 1984, when he and Dave Knoetzel formed their own business, Town and Country Construction. They built many new homes and remodeled even more in the Rock County area. He always loved driving around the local area, pointing out which houses he had built or worked on. Mike acquired his real estate license in 1995 and began working for Waldo Realty and later, Pat Thomson Reality. At that time, he was also the course manager at Bassett County Club and took a lot of pride in having a meticulously manicured course. In 2008 Mike joined GJW, Inc. as the farrowing manager. He was able to reconnect an old bond with his father, who managed a pig farm when Mike was growing up. He also put his construction skills to use in the maintenance department. Poor health forced early retirement in 2019. Mike was always so proud and active in the lives of Shelly and Brady, enjoying each and every activity they participated in. Many memories were made with great friends through the years, following nieces, nephews and kids competing in all activities for the Rock County Tigers! In Mike’s young adult life, he would be found enjoying just about any outdoor activity. He loved spending time with his brothers-in-law and many other friends hunting, fishing, and playing golf. He was definitely no stranger to fun. He could literally spend hours sitting at a blackjack table. He loved his time trapping, and in the trapping shed, with friend, Bernie Hart. Mike and Bernie also went into the cattle business together for a while. Mike was so very proud to be able to pass his brand down to his grandson. Mike, son Brady, son-in-law Beau, grandson Gage, and close friend Bernie were recently able to enjoy one last fishing trip together in Mobridge, SD. His brother Curt was supposed to be on the trip, but unfortunately, he was unable to join them. No one could have imagined the love that erupted in Mike’s life when his first grandchild was born and only continued to grow with the addition of each one. Recently, the granddaughters would walk to Grandpa’s house after school on Tuesday afternoons. Jan received many texts or phone calls asking, “shouldn’t MY girls be here by now,” if he couldn’t see them out the front door by a certain time! Sorry Mrs. Cosgrove, but Grandpa Mike was not a fan of Tuesday afternoon running club, as it cut into his “Papa” time. Mike also had a huge passion for black lab dogs. Many hours since Mike’s retirement were spent driving the countryside with a grand dog hanging out the back window of his pickup. Mike fought his 4 ½ year battle with cancer like no other. None of us realize the pain he suffered as complaining just wasn’t something he did. He will be remembered for so many things, but most recently his toughness and unwillingness to give in to cancer. He was determined to fight until the bitter end. Mike died on Monday, November 15, 2021 at the Rock County Hospital in Bassett, surrounded by his loving family. Mike was preceded in death by his parents, Gene and Laurel Foster; brother, Kevin Foster; niece, Jessica Foster; parents-in-law, Dean and Marilyn Kinney. He is survived by his grade-school sweetheart and wife of 43 ½ years, Jan; daughter, Shelly and husband Beau; son, Brady and wife Kasey; 6 grandchildren: Gage, Maci, Ryli and Coy Herrington, Reese and Jordyn Foster; brother, Curt Foster and wife Kelly; sisters-in-law, Julie Foster, Deb Fischer and Butch, Jude Lutz and Joe, Dee Hollenbeck and Mart; brother-in-law, Jeff Kinney; and several nieces, nephews and friends. Funeral Services were held on Friday, November 19, 2021 at the St. Peter Lutheran Church in Bassett with Vicar Nancy Moore officiating at the service. Music was provided by Faye Smith. The CD Selections of “Go Rest High On That Mountain” by Vince Gill, “Till You Can’t” by Cody Johnson & “The Dance” by Garth Brooks were played. The obituary was read by Jim Arnholt. Interment followed in Bassett Memorial Park Cemetery. Casket Bearers were: Clay Fischer, Trent Kinney, Chase Hollenbeck, Preston Foster and Derek Foster. Honorary Casket Bearers were: Jeff Kinney, Butch Fischer, Joe Lutz, Mart Hollenbeck, Bernie Hart and John Glidden. Memorials were suggested to Rock County Hospital, Rock County High School Foundation, St. Peter Lutheran Church, Bassett Country Club or to the family in Mike’s name. Hoch Funeral Home of Bassett was entrusted with the service arrangements.

The family of Michael Eugene Foster created this Life Tributes page to make it easy to share your memories.