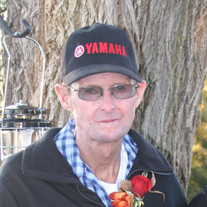 OBITUARY OF MICHAEL JOHN CLARK Michael John “Mike” Clark was born June 6, 1954 to John A. “Jack” and Frances M. (Herrington) Clark in Ainsworth, Nebraska. Mike passed away on Friday, August 17, 2018 at CHI Health Good Samaritan Hospital in Kearney, Nebraska. Mike was the fourth of seven children. He joined sisters Patricia, Ellen and Mary. Later joining the family were siblings Anthony “Tony”, Catherine and David. Mike was raised on the family ranch near Long Pine, Nebraska. He attended rural schools through 7th grade when he came to Bassett Grade School. Mike graduated from Rock County High School with the Class of 1973. He was joined in marriage to Martha “Marty” (Clay) on October 9, 1976 at Springview, Nebraska, and to this union three children were born Jessica Ann, Robert Anthony and Hillary Kay. The Clark family farm instilled a work ethic in Mike that lasted his whole life. Besides doing chores at home when he was too young to drive, he snuck over the hills and worked for the Hollenbeck’s in the hayfield. While he was still in high school, he farmed at night for Jerry Kirwan. He continued with Jerry until 1980 living at Springview. He worked for Homer and Clarabelle Kenner until 1982 when the family moved to Bassett and worked for Verny and Don Krieger until 2008. He worked one year for Beck Well and Irrigation. In August of 2009, he start working for the Farmers-Rancher Coop at Ainsworth until the time of his death. Along with his day job, he was in partnership with Harv Devall in CDF Farms and Mike and Marty run cattle with the Clay Ranch. Mike was preceded in death by his parents John and Frances; and brother Tony; a nephew Troy; and numerous in laws. He is survived by wife Marty, children Jessica Clark of O’Neill, Nebraska Rob (Angie) Clark of Ainsworth and Hillary (Bret) Dearmont of Newport, Nebraska; grandchildren Charton Clark of Bassett, Ashton and Mattie Dearmont of Newport, step grandchildren Kayla Klatt of O’Neill and Drew Klatt of Ainsworth. Also surviving are his siblings Patricia (Ron) Dvorak of Bismarck, North Dakota, Ellen (Ken) Ackerman of Omaha, Nebraska, Mary (Rich) Snyder of Arlington, Virginia, Cathy (Steve) Sybrant of Bassett, Dave (Jolyn) Clark of Long Pine, his mother-in-law Sarah Clay of Bassett, former daughter-in-law Roslyn Turner-Clark of Bassett, sisters and brothers- in-law, Doug (Mark Kane) Clay of Sacramento, California, Ed (Peggy) Clay of Wiggins, Colorado, Sheri Clay of Springview, Dave (Karan) Clay of Long Pine, Mel Clay of Arcadia, Nebraska, Bev Clark of Neligh, Nebraska, Caron Clark of Pauline, South Carolina; along with numerous nieces, nephews and extended family members and friends.

The family of Mr. Michael John "Mike" Clark created this Life Tributes page to make it easy to share your memories.