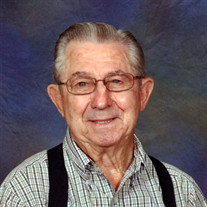 Merlin Frederick “Turk” Beebout was born to LeRoy and Rosa (Akert) Beebout on June 25, 1924 in Johnstown, NE, the sixth of eight children. He graduated from Johnstown High School in 1942, the final class to do so before the school closed. Turk was drafted into the US Army on June 3, 1943 and served 32 months in the Pacific Theatre. He was honorably discharged on January 6, 1946. On August 28, 1949 Turk married Jeree Schiessler in Ainsworth, NE. To this union four children were born: Brent, Kristine, Kathleen, and Bruce. Turk and Jeree were married for 61 years and lived all of their life in Ainsworth. Turk worked for the Bureau of Reclamation and for KBR Rural Public Power District for 36 years, retiring in 1989. He was a member of Ainsworth Elks Lodge #1790, the Evangelical Free Church, and a lifetime member of Ainsworth American Legion Post 79. He was a devoted husband, father, and grandfather. Turk was an all around sports fan. He loved baseball, the Huskers, and especially attending his grandchildren’s activities. He had a special affection for Clear Lake and spent many hours at the lake working, hunting, and fishing – in that order. Turk was preceded in death by his wife, Jeree; sisters Lois Beebout, Ardis Johnson and husband Wayne, Leona Morrow and husband Eldon; brothers Willard Beebout, Allan Beebout and wife Jean, William (Pooch) Beebout; son-in-law Scott Finley; and brother-in-law Duane Burger. Turk is survived by his sons Brent and wife LaRene of Lincoln, NE and Bruce and wife Ros of Kearney, NE; daughters Kris and husband Steve Broekemeier of Valentine, NE and Kathy Finley of Longmont, CO; 11 grandchildren; 22 great-grandchildren; sister Shirley Burger of Ainsworth; sister-in-law Pat Beebout of Lincoln; devoted friend Fred Spearman of Ainsworth; and many nieces and nephews. Turk passed away September 7, 2019 at the Sandhills Care Center in Ainsworth at the age of 95 years, 2 months, and 13 days. His memorial service was held on Tuesday, September 10, 2019 at 2:00 PM at the Evangelical Free Church in Ainsworth, NE with Pastors Scotty Clark and Bruce Beebout officiating. Soloist Monte Burger, provided the selections of “You Raised Me Up” and “It’s A Wonderful World. Honorary Urn Bearers were Turk’s Grandchildren, and Great-Grandchildren. Military Honors were provided by the Ainsworth American Legion Post #79. A private inurnment was held following the service. Memorials may be directed to The Brown County Courthouse Park Veterans Memorial or The New Clear Lake Club.

Merlin Frederick &#8220;Turk&#8221; Beebout was born to LeRoy and Rosa (Akert) Beebout on June 25, 1924 in Johnstown, NE, the sixth of eight children. He graduated from Johnstown High School in 1942, the final class to do so before the school... View Obituary & Service Information

The family of Mr. Merlin F. "Turk" Beebout created this Life Tributes page to make it easy to share your memories.