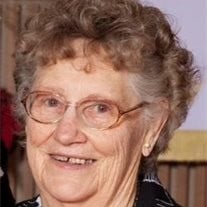 Melva Louise Fletcher, 88 years old, passed away on Monday, January 11, 2016 at Rock County Long Term Care at Bassett, Nebraska. She departed peacefully while surrounded by family. Melva was born to Henry and Verna (Metz) Cords on May 13, 1927. She was the oldest of five children, a role she was quite proud of. They grew up on a farm near Pleasanton, Nebraska at a time when horses were used for planting and harvesting crops. It was up to Melva to ensure that the chores were done and done right, both indoors and out. No doubt this is where she developed her 'can do' attitude. She graduated from Ravenna High School. She married John Fletcher on March 3, 1946 in Pleasanton. At Melva and John's vow exchange, Melva's grandparents, Mr. and Mrs. BF Metz, along with John's parents, stood-up as attendants. To this union, five children were born. Her first three kids were delivered at home. In 1958, the family relocated to Bassett where John and Melva eventually opened and operated a mechanic/John Deere shop. They were married for over 69 years. Melva was a wonderful cook, yet rarely used a recipe. She was employed over the years at Rock County Hospital, Bassett Sale Barn Café and the Range Café. But that talent wasn't just reserved for income. Her family has vast memories of her homemade chicken and noodles, pies, breads and cakes. She was known to whip up a lunch menu lickety-split for company and was adamant about demanding that one stay-and-eat or at least enjoy a freshly brewed cup of coffee. Her paprika-sprinkled potato salad and deviled eggs were constant reminders of her presence at family gatherings. Melva was an avid quilter and crochet artist. From bed quilts to hand towels to coasters and dishrags, her family members have them all. She made roughly 50 hanging crocheted hand towels for Long Term Care staff members just a few weeks ago as Christmas gifts. Her grandchildren were bestowed an afghan upon graduation from high school, decorated in their favorite colors. She will fondly be remembered for doing word searches, needlepoint, cutting quilt pieces or crocheting, usually while engaged in conversation and sitting in her recliner. Melva enjoyed watching or listening to the Chicago Cubs, none more so than when Sammy Sosa was their star. She was known to frequent auction sites and come away with a box or two that in her mind were full of bargain items. She and John always had quite an elaborate garden. Melva could churn out canned goods with such efficiency; she did this well into her later years. Her basement was always lined with produce that she single-handedly kept stocked. Her pickles were famous items in the hearts of many, especially amongst her grandchildren; they were known to sneak a jar or two. And she always had pickled beets for "Babe". Her green thumb extended to plants and flowers, which occupied her porches and windows. She loved African violets and gave strict instructions on how they should be watered. The last days of her life were not easy, but her family takes comfort in knowing that she was greeted at the Heavenly gates by the word 'mom' coming from her two sons that departed much too early, as well as her husband who we envision was rocking on a porch swing, saving her a spot. Melva was loved dearly and will be missed by all those who had the opportunity to know her. She will long be remembered as a woman of great strength and warmth. She was the family's historian…a true matriarch. She was a devoted wife, mother, grandmother, sister, aunt and friend. Melva was preceded in death by her husband, her parents, sons, John Henry and Dennis, son-in-law, Ken Robertson, sister, Ina "Tootie" Coffman, brothers, Ben and Carly Cords, grandson, Shaun Fletcher and great-grandson, Joel Fletcher. Her memory lives on by those who survive her, daughter, Lana (Don) Pfeifer of Bassett; sons, Kent (Jody) Fletcher of Shelton, Nebraska and "Babe" Monte (Mary) Fletcher of Spencer, Nebraska; brother, Kim (Jackie) Cords of Ravenna, Nebraska, former daughters-in-law, Mary Frahm and Nickie Buell; 12 grandchildren: Shelby Ruhl, Aaron (Julie) Fletcher, Charlie (Judy) Robertson, John (Misty) Robertson, Dennise (Cody) Daniels, Donnita Pfeifer, Bobby Jo (Deven) Holt, Sarah (Tony) Rolfsmeyer, Patrick Fletcher, Kyle (Michelle) Fletcher, Colby (Jordan) Fletcher and Tyler Fletcher; 13 great-grandchildren, Treyton, Paxton, Connor, Lexcee, Kaylee, Logan, Noah, Courtney, Alyson, Arabella, Henry, Collins and Beckett; a great-great-grandson, Kage, as well as numerous nieces, nephews and friends. A special thanks to the Hospice program, Rock County Long Term Care, Dr. Tubbs, Tara Swanson, FNP-C and all the staff who cared for Melva. Her life was celebrated on Thursday, January 14 at 10:30 A.M. at United Methodist Church in Bassett with Pastor Rod Heilbrun and Pastor Dennis Quigley officiating the service. Music selections of "Precious Lord, Take My Hand", "In the Garden" and "On Eagle's Wings" were provided. Honorary bearers were all of Melva's Grandchildren. Inurnment to follow at Bassett Memorial Park Cemetery. Hoch Funeral Home was entrusted with her arrangements. Memorials were suggested to the family in her name for a future designation.

The family of Mrs. Melva L. (Cords) Fletcher created this Life Tributes page to make it easy to share your memories.