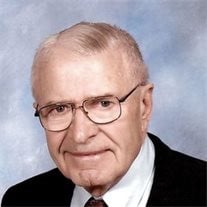 Melton A. "Mel" Crisman was born October 15, 1933 in Wagner, South Dakota to Roy and Grace (Rude) Crisman. He was the seventh of nine children, joining Roy Jr., Glyde, Roland, Burton, Gloria, and Ken, with Betty and Clark to follow. Mel grew up in Wagner and helped on the family farm. He attended school in Ravinia, South Dakota graduating in 1951. Following graduation, Mel enlisted in the United States Army and was stationed in Fort Bragg, North Carolina and Fort Benning, Georgia. Mel finished first in his class of 170 men in the infantry noncom school. He was with the support company in the 325th Airborne Infantry Regiment. Mel served his country honorably and his decorations included Sr. Parachute Badge, Expert Infantry Badge and the Good Conduct Medal. He spent his time enlisted as a para trooper in the 82nd Airborne Division and ended his military career as a Sgt. (E-5). Mel then attended college at South Dakota State University obtaining an Electrical Engineering Degree as well as Most Handsome Beard at SDSU's Hobo Days. Mel met his bride, F. Marline (Wicker) at a dance during college. Which dance, the two could never agree on. They were married on December 23, 1956, in Wagner. After their graduations, Mel was hired by Westinghouse Electric Company in Des Moines, Iowa. Mel's career with Westinghouse moved the family frequently and included Des Moines, Omaha, Nebraska, St. Louis, Missouri as well as, Pittsburgh and Philadelphia, Pennsylvania. While in Omaha, Mel and Marline welcomed a baby boy, Mickal Allen in 1965 and a daughter, Susan Marie in 1967. After an astonishing career with Westinghouse, Mel and Marline retired to Rapid City, South Dakota in 1994. They fell in love with the Black Hills and were blessed to be much closer to family. Later that same year, their world was crushed with the passing of their daughter, Sue. Sue had a two year old daughter, Maria, that Mel and Marline were blessed to be able to raise. Mel spent his time during retirement 'tinkering' on their land in Rockerville, South Dakota. He enjoyed mowing, trimming and cutting trees and especially using his John Deere tractor, which brought back many childhood memories from the farm. The only bad memory was his run in with a rattlesnake. They had planned to build a home there but Mel's caring and cautious nature wouldn't let him feel comfortable having Maria there with rattlesnakes. He was also quite experienced with wood working. Many of his projects will be able to be enjoyed by family for years to come, such as a rocking horse and toy box of Maria's that Mickal Jr. and Mia enjoy currently, and will someday be used by Maria's children. Mel stayed active during retirement, spending a great deal of time with the American Legion and loved going to baseball games in town. Following Maria's graduation in 2010, Mel and Marline moved to Long Pine, Nebraska to be closer to their son, Mickal and his wife Kathy and grandchildren Mickal Jr. and Mia. Mel is fondly remembered for so many things; he was an extremely dedicated and hardworking man yet also caring and kind. He had a gentle soft spoken nature, yet strong and determined. He was a man to look up to, respect and admire, as many did. Mel was diagnosed with Parkinson Disease in 2002, and fought a long hard battle but succumbed to the disease on December 20, 2016 at the Parkside Manor in Stuart, Nebraska. Mel was preceded in death by his parents, Roy and Grace Crisman, sister, Gloria and brother-in-law, Don Young, brother Ken Crisman, sister, Glyde and brother-in-law, Don Miller, brother-in-law, Wayne Nesby and daughter, Sue Crisman. Left to mourn his passing is his son, Mike Crisman and wife Kathy, grandchildren, Mickal Jr. and Mia of Long Pine, and Maria Crisman and fiancé, Tanner Spilde of Bullhead City, Arizona; siblings, Roland Crisman and wife, Mayme of Wagner, Burton Crisman and wife, Gae of Grand Junction, Colorado, Betty Nesby of Ipswich, South Dakota; and Clark Crisman and wife, Sharon of Vinton, Iowa; two sisters-in-law, Geraldine Crisman of Wagner, and Laura Crisman of Salida, Colorado, and nieces, nephews and other family members. We know this will be a beautiful Christmas in heaven for Mel with his wife, Marline, daughter Sue, his mother, father, siblings and many other family members and friends that have passed before us. Graveside Services were held on Tuesday, December 27, 2016 at the Grandview Cemetery at Long Pine, Nebraska with Pastor Jesse Meduna officiating at the service. "Amazing Grace" was sung at the graveside. Serving as casket bearers were, D.D. Linse, J.D. Alberts, Todd Hollenbeck, Ryan Welke. Military Honors were conducted by the Long Pine American Legion Post #260. Hoch Funeral Home assisted with the arrangements.

The family of Mr. Melton A. "Mel" Crisman created this Life Tributes page to make it easy to share your memories.