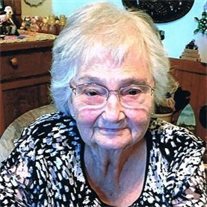 Mary Lou Knoetzel was born May 14, 1933 in Stuart, Nebraska to Fred and Emma Lanz. She was the oldest of three and adored her little sisters, Alice and JoAnn. Mary Lou learned to work at a very early age and told many stories of helping her Dad in the garden, milking cows or driving through the pasture checking cows. While work was important there was always time for fun. According to the diary she kept with her Dad, many fun times were had with family, friends and neighbors…they were always very close. Mary Lou spoke many times about growing up and would reminisce about her Dad singing or reciting poetry or about her Dad talking to his daughters. She mentioned many times that they brought the BEST lunch to school. Mary Lou graduated from Rock County High School in 1951 with her four first cousins, John Rumbaugh, Delano Lanz, Donna Lanz, and Shirley Lanz. The five cousins remained close all their lives. After graduating from Rock County High School, Mary Lou taught country school south of Bassett. While teaching school she boarded with Art and Lydia Knoetzel. Courtney and Mary Lou were married on June 15, 1952. Mary Lou said this was the happiest day of her life! In March 1953 Karen was born, Mary Ann in April 1954, and David May 1955. Stephen joined the quickly growing family in November 1957, and Faye January 1960. The years that followed were busy not only with raising a growing family but milking cows, cleaning chickens, ironing, babysitting, gardening and canning along with many other things. The time Mary Lou and Courtney spent as custodians at the Bassett Grade School were years they truly loved and shared fond memories of teachers and students. One of Mary Lou's favorite sayings was, "Happiness does not come from doing what you like to do but from liking what you have to do!" Needless to say some days did not have a beginning or an end! However, when the day was done family is what mattered most! There were ALWAYS three meals on the table and there were cleaned and IRONED clothes! Prayers were said before meal and at bedtime AND probably many times in between! Church was never missed on Sunday! Just imagine getting five kids under seven fed and ready for church, lunch planned AND the morning milking along with chores!?!? Mary Lou, along with her husband, Courtney, worked hard to instill their work ethics in their children. Yes, you can rake when the wind is blowing and you can deliver papers in the rain! Mary Lou was a GREAT seamstress making most of her children's clothes! Always a GREAT quilter, she joined a quilt guild and enjoyed the many quilting projects and even more her wonderful quilting friends! Some of her family's most treasured gifts were her handmade and hand quilted quilts. As one granddaughter reminded us, "being wrapped in one of Grandma's quilts surrounds us with her love." Mary Lou and Courtney were blessed with 13 grandchildren (13 still living) and 17 great grandchildren (16 living). Mary Lou's life revolved around her children, grandchildren and great-grandchildren and she rejoiced with each addition! This last September most of her family gathered at the Long Pine State Park and tubed down Pine Creek. Other celebrations she was excited to be able to attend this year were two of her grandson's weddings and just recently, her youngest great grandson's second birthday party. These events were a VERY special and blessed season or all! While Mary Lou spent a lot of this last year in the hospital, she connected with many of her medical team especially her surgeon, Dr. Michael Jobst. At her last visit in the hospital a nurse stopped in on her day off to give Mary Lou a beautiful bracelet that she wears yet today. Nurses always told her how she touched their hearts. Mary Lou passed from this world on December 9, 2017. She looked forward to meeting her Heavenly Father and eternal life! Her legacy will live on in all who knew and loved her! Those who have gone before Mary Lou include her loving parents, Fred and Emma Lanz, her devoted husband, Courtney, three grandsons, Joe and Stu Knoetzel, and Scott Knoetzel, great-grandson, William Schwarz and son-in-law, Steve Gordon. Those left to treasure her memories include, Karen (Darcy) Mickelson of Mt. Vernon, South Dakota. Mary Ann (Bill) Krejci of Aurora, Nebraska, David (Linda) Knoetzel of Bassett, Stephen (Carrie) Knoetzel of Imperial, Nebraska, and Faye Gordon of Lincoln, Nebraska. Grandchildren, Stephani (Erin) Kenward of Mankato, Minnesota, Micheal (Marie) Mickelson of Mt. Vernon, South Dakota, Meghan (Walt) Moody of Mitchell, South Dakota, Laura (Mark) Schwarz of Colby, Kansas, John (Adrienne) of Lincoln, Nebraska, Sara Krejci of Hampton, Nebraska, Brett (Christa) Knoetzel of Bassett, Sam (Jess) Knoetzel, Imperial, Don Gordon, Lincoln, Tyler (Jenna) Gordon, Orlando, Florida. Great-grandchildren: Jaeden, Jordyn, and Kalen Kenward, Connor Degen, Addyson and Kooper Moody, Matthew and Timothy Schwarz, Madison Krejci, Grace Neylon, Mary Jo and Norah Krejci, Charlie, Erin and Jolynn Knoetzel, and Payton Gordon. Sisters, Alice (Bill) Allen of Bassett, and JoAnn (Bill) Babcock, Bassett and many family and friends. Funeral Services for Mary Lou Knoetzel were held at the St. Peter Lutheran Church in Bassett with Pastor Nancy Moore officiating. Music was provided by Kristie Sybrant-Keller. Congregational hymns provided were "How Great Thou Art" and "Amazing Grace." Pallbearers were Brett Knoetzel, Sam Knoetzel, Don Gordon, Tyler Gordon, John Krejci, and Micheal Mickelson. Honorary bearers were Stephani and Erin Kenward, Meghan and Walt Moody, Laura and Mark Schwarz, Swara Krejci, Adrienne Krejci, Jenna Gordon, Christa Knoetzel, Jess Knoetzel, and Marie Hauge. Burial followed at the Bassett Memorial Park Cemetery. Hoch Funeral Home of Bassett was in charge of the arrangements. In lieu of flowers memorials were suggested to the St. Peter Lutheran Church in Bassett.

Mary Lou Knoetzel was born May 14, 1933 in Stuart, Nebraska to Fred and Emma Lanz. She was the oldest of three and adored her little sisters, Alice and JoAnn. Mary Lou learned to work at a very early age and told many stories of helping her... View Obituary & Service Information

The family of Mrs. Mary Lou (Lanz) Knoetzel created this Life Tributes page to make it easy to share your memories.