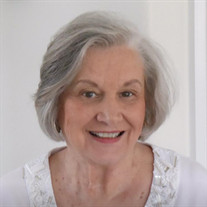 Mary Lou (Bejot) Van Doozer was born September 30, 1936 in Ainsworth, NE to Jesse F. Bejot and Leah Ida Primmer. She grew up in Ainsworth with her five siblings: Francis Edwin Bejot (5/2/1934 - 1/7/2019), Dennis D Bejot (10/13/1935), Lorideen May Bejot (4/3/1938), Victor Calvin Bejot (6/23/1939 - 4/20/1975), and Lewis Eugene Bejot (7/26/1940 - 1/13/1961). She attended all 12 years of schooling in Ainsworth and graduated from Ainsworth High School in 1954. Just after high school, Mary entered and won the Miss North Central Nebraska beauty pageant. Following high school, Mary Lou moved to Denver, CO attracted by the excitement and independence of living in a bigger city. She lived downtown, working secretarial jobs. Shortly after moving to Denver, Mary Lou met and married Robert Lee Van Doozer. They moved to Thornton and then Arvada and had four children: Gina Lee, Chris Alan, Corey Jay, and Scott Lewis. In the 1970’s, Mary attended and graduated paralegal school, eventually working for Holland and Hart in downtown Denver for 12 years. Mary and Bob were divorced in 1981 and with her new found independence, she pursued a new direction in life as a business owner and restauranteur in 1991. Owning and managing the Arvada EggShell was her pride and joy of her life accomplishments. She became highly active in the Arvada civic community as a founding member of the Festivals Commission and participated on the Board of Historic Olde Town Arvada working toward the revitalization of Olde Town. Under her direction, The Arvada EggShell won the Pride of Arvada Favorite Breakfast Place in 2002 and Business of the Year in 2005. And in 2008, Mary won the prestigious Lloyd J King Entrepreneurial Spirit Award honoring individuals whose traits and character typify an exemplary entrepreneur. She was always giving back to the community whenever she could in her role as a prominent business figure in Arvada. One of her proudest moments was being able to fundraise $6,000 for the Arvada Food Bank. Another admirable community service project was her creation of the “High Tea” hosted at the EggShell for community members aged 90+. This event was free of charge, held several times a year, where Mary made the food and preparations herself and was enjoyed by many. Mary retired in 2012 and lived at her home in Arvada until December 2018 when she moved to Parker Senior Living in Parker, CO to be closer to her sons, Scott and Corey. Mary passed away in her residence on Saturday, February 23, 2019. She will be greatly missed by her friends and family. She is survived by her brother and sister, Dennis (Janet) and Lorideen (Norman), her daughter, Gina DeArcos (Phil), sons, Chris (Kathy), Corey (Michele), and Scott (Lori), grandchildren Lindsey Antonio, Brad Van Doozer, Jessica Van Doozer, Hannah Van Doozer, Travis Van Doozer, and Kristi Halligan, and great-grandchildren, Bryce and Isabella Van Doozer. Burial will take place in Ainsworth, NE. In lieu of flowers, memorials are suggested to the family in her name. Funeral Services were held on February 28, 2019 at the United Methodist Church in Ainsworth, Nebraska with Pastor David Randall officiating the service. Instrumental music of “How Great Thou Art” and “Amazing Grace” was provided by Sherry Campbell. Special CD selection of “Hallelujah” by Lindsey Stirling was also provided. Pallbearers were, Gina DeArcos, Phil DeArcos, Chris Van Doozer, Corey Van Doozer, Scott Van Dooser, and Travis Van Doozer. Burial followed at the Ainsworth Cemetery. A Celebration of Life with an open reception will be held at the King of Glory Lutheran Church in Arvada, Colorado at 7:00 PM on Saturday, March 2, 2019.

The family of Ms Mary Lou (Bejot) Van Doozer created this Life Tributes page to make it easy to share your memories.