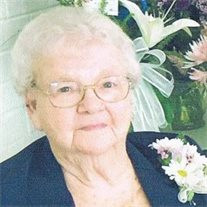 Mary Lee Kern Baker was born October 7, 1925 in Robinson, Kansas to Jesse and Ione Kern. She passed away Thursday, February 15, 2018 at Ainsworth, Nebraska. Mary graduated from Robinson High School in 1943 and moved with her mother to Ainsworth. Her father had come earlier in 1941 to help in the construction of the Army base in Ainsworth. As a child Mary really did have a pet lamb, Betty, that went everywhere with her. They even went to New York City in 1938 appearing with the lamb on the variety radio show, "Gabriel Hester Nationwide Variety Show." Her dad built a crate that was attached to the car for Betty to ride in. Jesse, Ione, Mary, and her sister Ruth made the trip. It was quite exciting! Mary and Glen were married September 4, 1945, when Glen was on leave from the Navy. They returned to Ainsworth after Glen's Navy duty was completed and raised two sons, Ken and Don. Mary enjoyed a long career at the Commercial National Bank and was a lifelong member of the Methodist Church. Singing in the choir was a particular joy for her. Mary was preceded in death by her parents, Jesse and Ione, brother's, Dale, Forrest, Dayton, sister, Ruth, and grandchildren, Daniel Ryan Baker and Andrea Baker Kabourek. She is survived by her husband Glen of Ainsworth, sons, Ken Baker (Estelle) of Lincoln, Donald Baker (Audrey) of Millard, Nebraska; three grandchildren, Jill Brandt (Derek), Jim Baker, and Megan Baker; and three great-grandchildren, Adam Amelia and Sierra. There will be a Celebration of Life on Saturday, February 24, 1:30 to 3:00 in the fellowship hall at the Ainsworth Methodist Church. There will be a short program followed by light refreshments. Graveside services will be held for the family at a later date. Memorials can be sent to the Ainsworth Methodist Church or the Ainsworth Senior Center. Hoch Funeral Home of Ainsworth assisted with the arrangements.

Mary Lee Kern Baker was born October 7, 1925 in Robinson, Kansas to Jesse and Ione Kern. She passed away Thursday, February 15, 2018 at Ainsworth, Nebraska. Mary graduated from Robinson High School in 1943 and moved with her mother to Ainsworth.... View Obituary & Service Information

The family of Mrs. Mary Lee (Kern) Baker created this Life Tributes page to make it easy to share your memories.