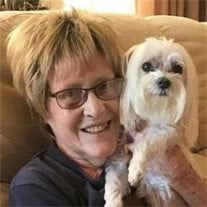 Mary "Memo" McMullen was born on August 14, 1944 to Mary (Brion) and M.B. Huffman. She passed away in Bassett, Nebraska on August 25, 2017. Mary lived with her parents on the family ranch in Wheeler County after her father's return from service in World War II. The family moved to Ewing, Nebraska where her parents owned and operated the Farmers State Bank. After they purchased the Commercial Bank the family moved to Bassett. Mary attended Rock County High School and graduated from East High School in Denver, Colorado. She attended various banking schools including the University of Wisconsin-Madison Herbert V. Prochnow Graduate School of Banking. She was employed by Commercial Bank for several years and served on the board of directors until its sale in 2010. Mary was active in the Bassett Arts Council, serving for 22 years as Executive Director and Secretary. She also served as Economic Development coordinator and was instrumental in getting the community designated as a Lied Main Street program participant. She served on the North Central RC&D Planning Council for many years as well as played an integral part of the Bassett/Rock County Revolving loan fund organization. Mary was a member of St. Mary's Episcopal Church and supported many other community endeavors. Mary loved to be outdoors working in her yard and garden and generously shared her fresh vegetables and canned goods. She also enjoyed knitting afghans for all occasions. Camping and spending time with her family and playing bridge were her favorite pastimes. Mary was preceded in death by her parents, M.B. and Mary Huffman, husband, Grover McMullen and step-son Lucas McMullen. Survivors include sister, Susan Strand, of Wayne, Nebraska; nieces, Michelle Heuertz and husband Greg of Hastings, Nebraska, and Jennifer Parker and husband Andrew of Wayne; nephew, Matthew Strand of Colorado Springs, Colorado; step-granddaughter, Angela Gunn and her husband Darrin of Seward, Nebraska; step-grandson, Patrick McMullen and wife Shelly of Kingwood, Texas; five step-great grandchildren, sisters-in-law, Norma McDaniel, Greta McMullen, Carolyn McMullen, brother-in-law, Fred McMullen and wife Francis. Other nieces, nephews, great-nieces, great-nephews, and one great-great niece. Family has requested memorials be made in her name to the following organizations; Bassett Arts Council, Rock County Historical Society, and HOPE Fund through Faith Regional Hospital, of Norfolk, Nebraska. Memorial graveside services were held at the Bassett Memorial Park Cemetery in Bassett, Nebraska with Pastor Dennis Quigley officiating the service. Honorary bearers were all of Memo's family and friends. Hoch Funeral Home of Bassett was in charge of the services.

Mary "Memo" McMullen was born on August 14, 1944 to Mary (Brion) and M.B. Huffman. She passed away in Bassett, Nebraska on August 25, 2017. Mary lived with her parents on the family ranch in Wheeler County after her father's return from service... View Obituary & Service Information

The family of Mary M. (Huffman) "Memo" McMullen created this Life Tributes page to make it easy to share your memories.