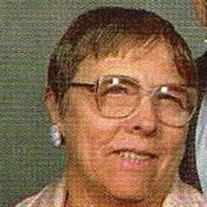 Mary Ann (Brown) Biltoft was born August 29, 1937 to James W. and Camilla (Kopsa) Brown at Pine Bluffs, Wyoming. She was the oldest of seven siblings. She passed away February 13, 2019, at 81 years of age, at the Good Samaritan Society in Atkinson, Nebraska, which had been her home since April 3, 2008. Mary Ann attended country schools. She married Elmer Biltoft, on September 1, 1958, at Sacred Heart Catholic Church in Long Pine, Nebraska. They began their married life on a ranch southeast of Bassett, Nebraska and spent a number of years on the Jim Drinkwalter Ranch in Cherry County. They were blessed with three sons, Bruce, Gary and Leo. They later moved with their family to Long Pine. She always enjoyed doing housework and family cooking in preference to doing outdoor chores and gardening. She made the best chocolate cake. Mary Ann loved her God and her church. She looked forward to attending weekly Mass and Rosary while living at the nursing home. Her family was the joy of her life. Preceding Mary Ann in death were her parents, parents-in-law, husband Elmer in 2003 and son Gary in 1990. She is survived by her sons: Bruce Biltoft of Atkinson and Leo Biltoft of Grand Island, Nebraska; brothers, Frank (Joyce) Brown of Grand Island, Joe (Pat) Brown of Bartlesville, Oklahoma, Harry (Nancy) Brown and Steve Brown all of Grand Island; sisters, Dorothy Cole and Helen Haskell of Ainsworth, Nebraska; along with numerous nieces, nephews and other relatives. A Rosary/Prayer service was held on February 21, at the St. Pius X Catholic Church in Ainsworth, with Memorial Services being held on February 22, 2019 at the St. Pius X Catholic Church. Father Phil Flott served as Celebrant. Music was provided by Pam Theis. Music Selections were, “Ava Maria,” “On Eagle’s Wings”, “Amazing Grace”, “How Great Thou Art.” Readings were read by Joe Brown, and John Frank Brown and wife Joyce Brown served as Eucharistic Ministers. Honorary bearers were all of Mary Ann’s friends. Inurnment followed at the Grandview Cemetery in Long Pine, Nebraska. In lieu of/flowers, memorials were suggested to the St. Pius X Catholic Church Altar Society, the Brown County Foundation, or to the Ainsworth Public Library. Hoch Funeral Home of Ainsworth was in charge of the arrangements.

Mary Ann (Brown) Biltoft was born August 29, 1937 to James W. and Camilla (Kopsa) Brown at Pine Bluffs, Wyoming. She was the oldest of seven siblings. She passed away February 13, 2019, at 81 years of age, at the Good Samaritan Society in Atkinson,... View Obituary & Service Information

The family of Mrs. Mary Ann (Brown) Biltoft created this Life Tributes page to make it easy to share your memories.