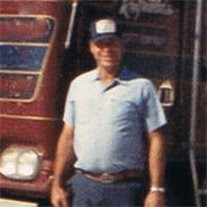 Marvin John "Tiny" Reynolds, 77, of Bassett, died January 24, 2017, at the Rock County Long Term Care in Bassett. He was born March 25, 1939, to Eldon Loren and Betty Maria (Dunbar) Reynolds in Almeria, Loup County, Nebraska. Growing up in southern Rock County, Marvin developed lifelong friendships with the Swanson boys. Many days they could be found tearing through the Sandhills with their families, never knowing what those boys might come up with next. Marvin attended Grimm School through the eighth grade, partook in 4-H and was a 1957 graduate of Rock County High School in Bassett. While in high school, Marvin excelled in sports, lettering in track and football all four years. He was also a member of FFA at Rock County High School. He placed third in the 880-yard relay in Class B Districts and first in the 880 relay in 1956 at state and second in state in 1957. He was third in the Sandhills 880 Relay. He received silver medals in the 880 relay in 1956-1957 at the North Central Nebraska Conference. He played freshman football while attending Wayne State for a year, studying to be a teacher. He served in the U.S. Army from Nov. 21, 1962, to Oct. 21, 1964, and was assigned to the 304th Signal Battalion near Seoul, Korea. Marvin received the Marksman and Sharp Shooter Rifle medals and the Good Conduct Medal. He achieved rank of Specialist and was discharged from the U.S. Army Reserves in October 1968. On Nov. 7, 1970, he married Lanette Marie Schmitz at St. Michaels Catholic Church in Newport. In August of 1971, they were blessed with twin boys, Shawn, and Waylon. In July of 1981 their daughter Joanie was the final addition to the family. Marvin's career goal changed when he became a trucker, a profession he loved for 60 years. He took his first load of cattle to the Bassett Sale Barn when he was 12 years old. In 1972, he took the first of many loads of cattle to the Bassett Feeding facility. Marvin made his first long-distance haul to California with Bill and Harold McNally of Ainsworth. Whether it was hauling fat cattle to packing plants, horses to New York, or strawberries and other produce coast to coast, the load had to go regardless of anything else. Most area truckers began their trucking careers hauling with "Little Chief," Marvin's CB handle. He also did custom haying, bluegrass farming, and worked on his trucks in his spare time. He is survived by his wife, Lanette; two sons, Shawn (special friend Melissa Denny) of Bassett and Waylon (Gina) of Newport; a daughter, Joanie (Bruce Dannatt) of Ainsworth; six grandchildren, Jeffery, Marcus, Edward, Rebecca, Troy and Robbie; mother-in-law, Delores Schmitz of Butte; sisters, Eldene (Elmer) Wall of East Wenatchee, Washington, Elaine ("Butch") Walker of Lebanon, Oregon. Sisters-in-law, Carol Hollenbeck of Bassett, Suzan Daily of Lincoln, Nebraska, Gayle (Roger) Lampman of Pilger, Nebraska, Brenda Schonebaum of Elk Point, South Dakota, Debbie (Michael) Heiser and Dianne (Kelly) Kalkowski, both of Lynch, Nebraska; and brothers-in-law, Craig (Linda) Schmitz of Trenton, Nebraska, Rex (Brenda) Schmitz of Valley, Nebraska, and George Pfeifer of Spencer, Nebraska. He was preceded in death by his parents, Eldon and Betty Reynolds; father-in-law, Edward Schmitz; and brothers-in-law, Gary Hollenbeck and Jerry "Buzz" Schonebaum. Memorial services were held at the United Methodist Church in Bassett, Nebraska with Pastor Rod Heilbrun and Ryon Blath officiating the service. CD selections of "Stone Cold Fingers" by Leland Martin, "In My Next Life" and "Silver Wings" both by Merle Haggard, were provided. Honorary bearers were Denny Derner, Vincent "Squeek" Hollenbeck, Kenton Schipporeit, Larry Paxton, Mark McNally, Brian Munk, and Tony Stahl. Inurnment followed at the Newport Cemetery, with Military Honors being provided by the Bassett American Legion Post #123. Hoch Funeral Home of Bassett was in charge of the arrangements. Memorials were suggested to the family in his name for further designation.

The family of Mr. Marvin J. "Tiny" Reynolds created this Life Tributes page to make it easy to share your memories.