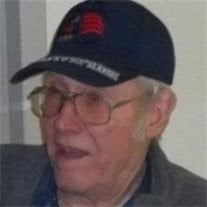 Marvin Earl Dorsey was born on March 17, 1927 south of Newport, Nebraska to Charles R. Dorsey and Florence P. (Thompson) Dorsey, and passed away on March 21, 2015 at the Good Samaritan Hospital in Kearney, Nebraska at the age of 88. Marvin was the 2nd child of four sons. He grew up south of Newport attending grade school at District 21 and graduated from Rock County High School in 1944. Marvin joined the Army and was stationed in Germany. Returning to Nebraska he pursued his lifelong passion of ranching with his father. On March 14, 1955 he married Mary Yenglin and to this union, two sons were born, Warren and David. They continued to live south of Newport with the exception of one year spent in Wyoming, where Marvin worked in the Salt Creek Oil Fields. Upon returning to Nebraska, Marvin went into partnership with his parents and continued ranching. Marvin and Mary later divorced. Marvin met and married Laurine Dittmer in 1981. Marvin and Laurine continued living on the ranch until 1983 when they moved to the Eddie Miller place between Newport and Bassett. They moved into Bassett in 1991 and Marvin served as the County Veterans Officer for several years. Laurine passed away on March 22, 2001. Marvin remained living in Bassett until his passing. Marvin will forever be remembered for his good-nature, great stories and love of life. He took great pride in his grandchildren and great-grandchildren, playing cards, playing the penny slots at the casino and especially enjoyed the "Newport Mafia Coffee Bunch." Marvin was preceded in death by his parents, brothers Delmer and Dallas, wife Laurine and many aunts and uncles. To mourn his passing he leaves behind sons, Warren Dorsey and wife Dawn of Ainsworth, Nebraska, David Dorsey of Valentine, Nebraska; three grandchildren, five great-grandchildren; step-daughters, Mary Shaffer and husband Mark of Valentine, Shirley Fuller and husband Ronald of Payson, Utah; six step-grandchildren and 13 step-great-grandchildren; brother, James Dorsey and wife Cathie of Greenacres, Washington; aunts, Minnie Hooks of Euless, Texas, Eva Thompson of Omaha, Nebraska, and Stella Thompson of Newport; along with nieces, nephews and other family members. Funeral Services were held at the St. Peter Lutheran Church in Bassett, Nebraska on Thursday March 26, 2015 with Father Randy Goeke officiating the service. Music was provided by Faye Smith and Stanley Larson provided the song selection of "In the Garden." Pallbearers were, Warren Dorsey, David Dorsey, Miles Dorsey, Nick Klabenes, Marty Jespersen, and Joe Caulfield. Honorary bearers were, the Newport Mafia Coffee Bunch and all of Marv's other family and friends. The Bassett American Legion Post #123 presented the Military Flag with Taps. Interment was held at the Crookston Cemetery near Crookston, Nebraska under the direction of Hoch Funeral Home of Bassett.

Marvin Earl Dorsey was born on March 17, 1927 south of Newport, Nebraska to Charles R. Dorsey and Florence P. (Thompson) Dorsey, and passed away on March 21, 2015 at the Good Samaritan Hospital in Kearney, Nebraska at the age of 88. Marvin... View Obituary & Service Information

The family of Marvin Earl Dorsey created this Life Tributes page to make it easy to share your memories.