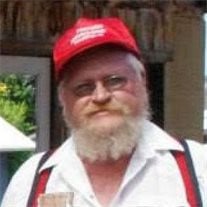 Mark F. Jilg passed away at his home in Bassett, Nebraska on February 28, 2018. Mark was born at the Bassett Hospital on August 19, 1953. He was the youngest born to Frank and Vera (Potratz) Jilg. As a young man Mark enjoyed spending time with family as well as working with the cattle on the family's ranch. He enjoyed camping and canoeing the Niobrara River with friends. Mark graduated Rock County High School in May of 1972. He enrolled in classes at Western Nebraska Tech in Sidney, Nebraska, where he graduated with a degree in Heavy Machinery. He worked road construction helping to build roads and form ditches in Nebraska, South Dakota, Kansas, and Oklahoma. In 1978 Mark, decided he'd had enough living out of a suitcase and returned home to work the family's ranch with his Dad, Frank and brother, Dennis. Mark enjoyed the bachelor's life, making trips to town to spend time running around with friends, but taking care of his cows was his passion. It was no strange occurrence for him to bring a new born calf into the house to warm it up in front of the stove. One night celebrating at the Fireman's Ball in Bassett, Mark met the love of his life, Susan M. Bredahl. A few short months later they were wed at the Holy Cross Catholic Church in Bassett, on February 16, 1980. Sue was the companion that Mark never knew he wanted, a city girl from Des Moines, Iowa. Sue helped him on the ranch with whatever job she could do. A couple years later, Mark and Sue decided they needed to add to their herd. Daniel G. Jilg was born on July 6, 1982, followed by Jacob D. Jilg on May 14, 1984, and rounded out with Thomas F. Jilg on June 14, 1985. Mark was very active in the community as he was a member of the Nebraska Cattleman's Association and Sandhill's Cattleman's Association. He enjoyed telling stories of the family's history to his kids, passing down the stories from the generations and helping his kids with all of their 4-H and FFA projects. Many nights Mark was in charge of getting all three boys to basketball practice in Newport and he was their biggest fan. As the boys got older, all they had to do was sniff the air for that cherry pipe tobacco smell and they knew Dad was on the sidelines, sporting all the boy's sport's buttons and his lucky troll pinned to his hat. After the boy's moved out, tragedy struck in 2009, when Sue passed away. Instead of folding his cards, Mark did what he always did; he pulled up his boot straps and got to work. He always said that "if I'm going to eat, my cows need to eat too." Mark had five grandchildren, whom he loved and enjoyed spending time with every day he could. Mark enjoyed cheering on the grandkids at sporting events and frequently drove many miles out to do so. He loved teaching his grandkids, just as he had taught his kids about the joys of taking care of the ranch and being God's caretaker. Mark was preceded in death by his parents Frank and Vera, his sister Mary Anne, and his wife Susan. He is survived by his children, Daniel (Lora) Jilg of Seward, Nebraska, Jacob Jilg of Lincoln, Nebraska, and Thomas (Megan) Jilg of Alton, Iowa; five grandchildren, Calvin, Levi, Adam, Oliver and Evan Jilg; and his siblings, Dennis (Barb) Jilg of Newport, Nebraska, Doug (Carol) Jilg of Broken Bow, Nebraska and Veta (Bruce) Hungerford of Long Pine, Nebraska, along with nieces, nephews, and other family members. Visitations were held on March 7, 2018 at the Holy Cross Catholic Church in Bassett with a Prayer Vigil being held and Father Phil Flott and Father Lou Nollette serving. Memorial Services were held on March 8, 2018 at the Holy Cross Catholic Church in Bassett, Nebraska. Father Phil Flott and Father Lou Nollette served as Celebrants. Music was provided by Trudy Nolles, with selections of "Here I Am Lord", "Amazing Grace", "On Eagles Wings" and "Lead Me, Lord." Honorary bearers were, Calvin, Levi, Adam, Oliver, and Evan Jilg. Inurnment followed at the Bassett Memorial Park Cemetery in Bassett. Hoch Funeral Home of Bassett was in charge of the arrangements. In lieu of flowers, memorials were suggested to the family for a future designation in Mark's name.

Mark F. Jilg passed away at his home in Bassett, Nebraska on February 28, 2018. Mark was born at the Bassett Hospital on August 19, 1953. He was the youngest born to Frank and Vera (Potratz) Jilg. As a young man Mark enjoyed spending time with... View Obituary & Service Information

The family of Mr. Mark F Jilg created this Life Tributes page to make it easy to share your memories.

Mark F. Jilg passed away at his home in Bassett, Nebraska on...