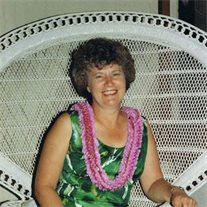 Marilyn Jean Schipporeit, age 83, passed away May 27, 2018 at Jennie Melham Memorial Medical Center in Broken Bow, Nebraska. Marilyn was born June 11, 1934 at Hoquiam, Washington to Herbert and Mona (Kelly) Pollei. Marilyn and her mother moved to California in 1938 after a divorce. She was raised by her step father, Hugh Gilbert who adopted her in 1951. Also in the family household was Hugh's daughter Marcelle. Marilyn grew up in Salinas, California and graduated from Gonzales High School in 1951. She graduated from Hartnell College at Salinas in 1953. April 1955, Marilyn met a Navy man, Alfred Schipporeit, in Salinas, California at her best friend's wedding. Al and Marilyn were married September 18, 1955 in Salinas. Following their honeymoon they returned to German Valley north of Brewster to live on the Schipporeit Ranch. Their union was blessed with three children, Mona Jean, Eric Alfred and Kenton Thane. She quickly conquered and excelled at all the aspects of being a rancher's wife. A gentle spirit with a contagious smile, she was a loving, caring wife and mother. Marilyn enjoyed making quilts and embroidered items for her family and many others who have received her homemade gifts. All her quilts were made by hand, usually embroidered and she was known to donate them for her church bazaar or the Brewster Fire Dept and EMT fundraisers. She taught herself to sew clothing when daughter Jean was born. Al and Marilyn enjoyed traveling and spending time with family. Marilyn was a member of Zion Lutheran Church, Ainsworth, Nebraska and the American Legion Auxiliary Post #323 of Brewster, Nebraska. Al and Marilyn moved from the ranch to Ainsworth, Nebraska in November 2011 and moved to Broken Bow, Nebraska in May 2015. Marilyn was preceded in death by her husband, Al (July 2017), parents, infant half brother Edward Gilbert, half brother Randy Pollei, stepsister Marcelle Wardrip and sister-in-law Irene Sinner. She is survived by her daughter, Jeanie Ryker and husband Dean of Cozad, Nebraska, sons, Eric Schipporeit of Brewster, and Kent Schipporeit and wife Debbie of Valentine, Nebraska; grandchildren, Jason (Sybil) Ryker, Monica (Casey) Douglass, Sara Schipporeit, Justina (Timber) Burge; Bryant (Myranda) Schipporeit and Thomas Schipporeit; great grandchildren, Ryan and Katelyn Douglass, Mattie and McClellan Ryker, Sarah, Marlie and Kimber Burge, Hanna and Maverick Schipporeit; sister-in-law Bette Guggenmos of Broken Bow;Patricia Anderson of Renton, Washington; and numerous nieces, nephews and friends. Funeral Services were held on June 5, 2018 at the Zion Lutheran Church in Ainsworth with Pastor Georg Williams officiating the service. Music was provided by Georgia Williams, with congregational selections of "In The Garden" and "Christ the Lord is Risen Today" being sung as well as a violin solo of "Amazing Grace" being performed by Mattie Ryker.. Pallbearers were Casy Douglass, Bryant Schipporeit, Jason Ryker, Ryan Douglass, Thomas Schipporeit, McClellan Ryker, and Timber Burge. Burial followed at the German Valley Cemetery near Brewster. Hoch Funeral Home of Ainsworth, Nebraska was in charge of the arrangements. Memorials were suggested to the Zion Lutheran Church of Ainsworth, or to the American Legion Auxiliary Post #323 in Marilyn's name.

The family of Mrs. Marilyn Jean (Pollei) Schipporeit created this Life Tributes page to make it easy to share your memories.