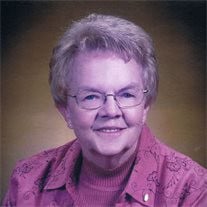 Marilyn Marie Hollingsworth was born on June 20, 1931 to Ira "Bus" F. and Alma B. Hollingsworth in Springview, Nebraska. She passed away on March 22, 2018, in Kearney, Nebraska at the age of 86. Marilyn attended and graduated from Keya Paha County High School in 1948. After her Normal Training she taught at Rural Schools for three years. She then married Duane "Fat" Philben on June 3, 1951, at the United Methodist Church in Springview. Together Fat and Marilyn had three children: Iree Lynne, Gary Duane, and Lori Marie. Their early years were spent in Springview. Fat was transferred to Ainsworth, Nebraska where he continued to work for KBR Rural Public Power District. Marilyn spent her time raising her children and babysitting for other families. Following the death of her husband in 1984, she went to work at Ainsworth Variety. During her 16 years there, she enjoyed visiting with anyone and everyone, and she found her niche working in the fabric department. Some of her favorite pastimes were singing, crocheting, watching Hallmark movies, quilting, and driving around town with her friends. She also loved attending sporting events. If there was a ball game in town - or even out of town - you could find her in the bleachers supporting Karlie or Jed and her Bulldogs. She made many trips south to watch Landen, Jordyn, Craig and the Swedes. You might have also found her volunteering at the Thrift Shop, at the Senior Center, at choir practice, or some meeting somewhere. Marilyn served and was active in many organizations. The American Legion Auxiliary - serving in various offices in the Unit and District, the Brown County Hospital Auxiliary, Jewel Rebekah Lodge #319, Ainsworth DOES Drove #54, 8 & 40, Young Matrons Extension Club, UMW, and she was a lifelong member of the United Methodist Church. If you can think of any other clubs - she was probably involved in them. Marilyn was preceded in death by her parents, her husband Fat, and her son Gary. She is survived by her daughters lree (Richard Schipporeit) of Ainsworth, and Lori (Craig Haake) of Gothenburg; grandchildren, Karlie McNally, Jed McNally, Landen Haake (Jordan), and Jordyn Haake; great grandchildren Dylan and Mikalie McCoy, Jake McNally, and Harper Haake; nieces, nephews, cousins and many friends. Funeral Services were held on March 28, 2018 at the United Methodist Church in Ainsworth. Pastor David Randall officiated the service. Music was provided by Sherry Campbell and the Members of the UMC Choir. Choir selections provided were "Old Rugged Cross" and "Great Is The Faithfulness". The congregational selection was "Amazing Grace." Pallbearers were Landen Haake, Craig Haake, Richard Schipporeit, Jed McNally, Jim Clopton, Dale Hollingsworth, Justin Ludemann, Jarod Ludemann, and Lance Philben. Organizational Rites were given by the Ainsworth American Legion Auxiliary #79 and the Ainsworth DOES Drove #54. Burial followed at the Ainsworth Cemetery under the direction of Hoch Funeral Home of Ainsworth. In lieu of flowers, memorials were suggested to the United Methodist Church or to the Sandhills Cancer Fund Inc. in Marilyn's name.

Marilyn Marie Hollingsworth was born on June 20, 1931 to Ira "Bus" F. and Alma B. Hollingsworth in Springview, Nebraska. She passed away on March 22, 2018, in Kearney, Nebraska at the age of 86. Marilyn attended and graduated from Keya Paha... View Obituary & Service Information

The family of Mrs. Marilyn M (Hollingsworth) Philben created this Life Tributes page to make it easy to share your memories.