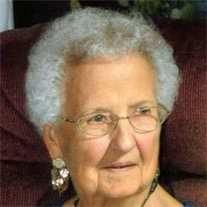 Marilyn F. (Hawks) Krause was born December 22, 1929 to Phillip and Bertha (Ward) Hawks near Elgin, Nebraska. Marilyn passed away on April 20, 2017 at the Sandhills Care Center at the age of 87 years. As many fathers did, her dad delivered her on the farm six miles west and one and a half miles south of Elgin. When Marilyn was seven, her dad was asked politely to leave the county, due to his "side job" of running moonshine. So he packed up his family and moved them to their home north of Long Pine, Nebraska in 1936. Her dad bussed kids to and from the Long Pine School, so Marilyn was the first one on and the last one off the bus everyday. She attended grade school there from the 3rd to the 8th grade. She also attended the 9th through the 12th grade in the Long Pine High School until February of her senior year. Marilyn married the love of her life, Orland Krause on February 10, 1948. To this union four children were born, Stephen Francis, Elizabeth Faye, Joan Joy and Nicholas Dominic. She followed Orland through his life taking care of her family. She worked occasionally for the Mary Jo Curtis family cleaning the house and motel to supplement the family's income. She was a member of the Long Pine Legion Auxiliary. Marilyn loved to go to coffee time at Big John's, playing cards, watching westerns on TV, ceramics, raising chickens and reading romance novels. She loved her children, grandchildren, great-grandchildren and great- great-grandchildren. Preceding Marilyn in death were her parents, Phillip Edward and Bertha Helen (Ward) Hawks; brothers, Ellis "Bud" Hawks, twins, Harold and Garold Hawks, and Philip Hawks; sisters, Helen Norton, Maxine Stec, Joy Pelster and Bonnie Fowler; infant son, Stephen Francis Krause; grandson, Rocky Dean Clark; and infant great-grandson, Bentley Dean Clark. Those left to cherish her memory are: daughters, Beth (Len) Clark, Joan (Eddy) Daniels, and son, Nick (Mary) Krause all of Ainsworth, Nebraska; 12 grandchildren, 32 great-grandchildren and six great-great-grandchildren. Graveside Services were held on Wednesday, April 26, at 10:00 AM in the Grandview Cemetery at Long Pine with Pastor Mick Thornton of the Evangelical Free Church officiating at the service. Casket bearers were: Hooter Dodds, Joe Dodds, Karma Kirkpatrick, Tracey Frank, Trisha Killion and BJ Clark and Jalynn Clark. Honorary Bearers were all of Marilyn's Grandchildren, Great-Grandchildren, Great-Great-Grandchildren, Family Members and Friends. Memorials have been suggested to the Long Pine American Legion Auxiliary Post #260 and to the E & L Baseball Program. Hoch Funeral Home of Ainsworth was in charge of the arrangements.

Marilyn F. (Hawks) Krause was born December 22, 1929 to Phillip and Bertha (Ward) Hawks near Elgin, Nebraska. Marilyn passed away on April 20, 2017 at the Sandhills Care Center at the age of 87 years. As many fathers did, her dad delivered her... View Obituary & Service Information

The family of Mrs. Marilyn F. (Hawks) Krause created this Life Tributes page to make it easy to share your memories.