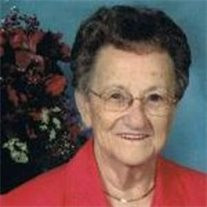 Marilyn Mildred Hollister, "Pat", as most of us knew her, was born on November 16, 1922 at the family farm located near Riverton, Nebraska, and passed away on November 29, 2012 at the Rock County Hospital in Bassett, Nebraska. Pat was the youngest child of Carl and Winefred Clow. She spent her early childhood on the farm and began her schooling in near-by Franklin Neb. In going through her belongings, a book was found that had been checked out of the Franklin Library in 1932. When Marilyn, "Pat" was 10 years old, the family moved to a ranch in the Sandhills, in the Rose area south of Bassett. She attended the Rose school and rode a horse 4 miles each way every day to get there. After she completed the 8th grade, Marilyn, entered High School in Bassett. At first she lived in the dormitory that was next to the old High School, and later she boarded with various residents of Bassett. One of the men of the house told her that she didn't look like a Marilyn, she looked like a "Pat," she was known as "Pat" from then on. Pat graduated from Rock County High School in 1940. In the meantime she had met Lou Bussinger and they were planning on getting married after her graduation. Pat's mother evidently saw an opportunity to get some work done, and she told Pat that she could not get married until she completed painting the kitchen. Lou and Marilyn were wed on June 15th, 1940 and moved to the Bussinger place south of Bassett where they lived happily until 1974, when Lou passed away. To this union two children Betty and Gary were born. Soon after Lou's death, she moved to Bassett to take care of her mother. In 1979, Pat married Leonard Hollister, and moved to Minneapolis Minnesota. Leonard passed away in January of 1982, and Pat moved back to her residence in Bassett. She continued to reside there until moving to the Rock County Long Term Care Facility. Pat enjoyed her friends and neighbors, playing cards, a good argument, and her family. Marilyn "Pat", was preceded in death by her parents, Carl and Winefred Clow; brother, Edward Clow; sister, Dorothy Hendershot; first husband, Louis Bussinger, second husband, Leonard Hollister; daughter-in-law, Elaine Bussinger; and grandson, Jamie Bussinger. She is survived by her daughter, Betty (Ron) Marcellus of Franklin, Nebraska; and son, Gary Bussinger of Bassett. Six grandchildren, 17 great grandchildren, nieces, nephews, neighbors and friends. Funeral services were held on December 3, 2012 at the St. Peter Lutheran Church with Pastor John Brink officiating over the service. Music was provided by JoAnn Swanson and Stanley Larson. Casket bearers were, Jeff Marcellus, Jodie Jantz, Tim Bussinger, Kevin Bussinger, Bradd Bussinger and Brian Bussinger. Honorary bearers were, all of Pat's other family and friends. Burial was held at the Bassett Memorial Park Cemetery in Bassett, Nebraska under the direction of Hoch Funeral Home of Bassett.

Marilyn Mildred Hollister, "Pat", as most of us knew her, was born on November 16, 1922 at the family farm located near Riverton, Nebraska, and passed away on November 29, 2012 at the Rock County Hospital in Bassett, Nebraska. Pat was the youngest... View Obituary & Service Information

The family of Marilyn "Pat" (Clow) Bussinger-Hollister created this Life Tributes page to make it easy to share your memories.

Marilyn Mildred Hollister, &quot;Pat&quot;, as most of us knew her, was...