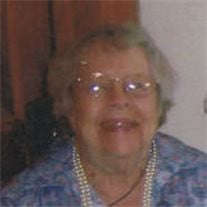 Marilyn Adeline Calver of Ainsworth, Nebraska died Saturday, January 26, 2013 at the Ainsworth Care Center . She was born on June 1, 1922 on the family farm south of Ainsworth, to Benjamin H. and Maude Estell (Dodds) Calver. Marilyn lived in and around Ainsworth all of her life. Her family moved to a ranch south of Johnstown, Nebraska, before she started school. She and her brother attended a one room school. Marilyn attended Ainsworth High School and graduated in 1940. She moved to Sioux City, Iowa during World War II and worked there for a short time. After returning back to Ainsworth, she started working for the Brown County Clerk's Office. She later became the Brown County Clerk and held the office until she retired in the 1990's. Marilyn was active in Brown County politics, the Brown County Historical Society and the American Legion Auxiliary #79. Survivors include her brother and wife, Kenneth H. and N. Ella Calver of Ord; nephew Richard Calver and his wife Connie of Lincoln; niece Annalee (Calver) Tvrdik and her husband Ronald of Kearney; grand nephews, Todd Tvrdik and wife Laurie of Kearney, Scott Calver of Lincoln, Nicholes Calver of Lincoln, and Jared Calver and wife Nicole of Lincoln; grand nieces Rebecca (Tvrdik) Anderson and husband Darin of Hallam, and Kathryne (Tvrdik) Welty and husband Casy of Kearney; great grand nieces and nephew Addelynne Welty of Kearney, Logan Calver of Lincoln and Braden Anderson of Hallam. She was preceded in death by her parents. Funeral Services were held on January 30, 2013 at Hoch Funeral Home in Ainsworth, Nebraska. Officiating the service was Pastor Neva Murphy. Special CD selections of "It's Not the First Mile" by Bob and Pearl Keim and "Peace In The Valley" by Red Foley were played. Pallbearers were Keith Baker, Albert Allen,Todd Tvrdik, Richard Calver and Ronald Tvrdik. Burial was held at the Ainsworth Cemetery. Memorials are suggested to the Brown County Historical Society.

The family of Marilyn A. Calver created this Life Tributes page to make it easy to share your memories.