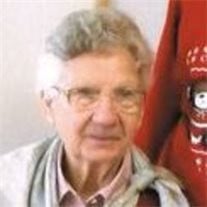 Denise Marie (Schmeichel Loeb) See, age 84, died Wednesday morning, November 26, 2014 at the Brown County Hospital. Denise was born on April 1, 1930, the only daughter of Glen and Ethel (Pate) Schmeichel of Johnstown, Nebraska. She had three brothers: Eugene, Derald, and Victor. In 1948, Denise graduated from Ainsworth High School, after completing her elementary and junior high school years in rural Johnstown. Denise was married to William "Bill" Loeb in 1948, and they made their home in Wood Lake, Nebraska. To this union, one son was born, Milton Loeb. Bill passed away after the plane he was piloting crashed. On July 11, 1957, Denise married Chester See, and they had three children: James, Tonya, and Randy. Denise was a rural contract mail carrier for the Ainsworth Post Office and later for Wood Lake. Denise was a loving wife and dedicated mother. She was well-respected for her service to the Ainsworth community. Denise was a long-time member of the United Congregational Church, and volunteered her time to the Ainsworth Thrift Store. She was a member of The Ainsworth DOES, a city bowling league, several card clubs, Bible Study groups, and was active at the Senior Center. Denise is survived by her four children: Milton (Linda) Loeb of Grand Island, Nebraska, James (Ruth) See of Crete, Nebraska, Tonya (Johnny) Rodriguez of McKinney, Texas, and Randy (Camie) See of Grand Island; nine grandchildren: Anne, Tangee, Michael, Jennifer, Heather, Jonathan, Ruby, Jesse, and Megan; sixteen great-grandchildren, nieces & nephews, and many friends. Denise was cremated according to her wishes. A Celebration of Life gathering was held November 30, 2014 at the Ainsworth Congregational Church. A memorial service will be held at a later date. Memorials were suggested to the family for future designation. Online condolences may be made to the family at: www.hochfuneralhome.com.

The family of Mrs. Denise Marie (Schmeichel) See created this Life Tributes page to make it easy to share your memories.