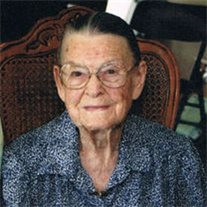 OBITUARY FOR MARGIE ANN VONHEEDER Margie Ann Polen was born July 1, 1916 to Harry and Ida (Shelbourn) Polen near Sparks, Nebraska. She passed away August 20, 2013 at Mother Hull Home in Kearney, Nebraska at the age of 97 years, one month and 19 days. Margie married Clinton R. VonHeeder on February 18, 1939 at Ainsworth, Nebraska, and to this union three children were born: John, Edwin and Alice. Margie grew up in the Sparks/Valentine Nebraska area and after her marriage to Clinton, they lived on a ranch in Keya Paha county from the early 1940's until moving to Ainsworth in 1998. The last 3 ½ years, Margie resided in an assisted living facility in Kearney. She was a very good homemaker and loved gardening, sewing and crocheting. She enjoyed fishing at Cub Creek Dam, as well as, spending time with her family and friends. The most important event of her life was in 1948 when the Gospel came and she embraced it whole heartedly. From then on, God was first in her life. Margie was preceded in death by her parents; her husband, Clinton who passed away in 2003; brothers, Willie, Marlow and Harry Polen; and a sister, Alice McAndrew. She is survived by her sons, John (Linda) VonHeeder of Texline, Texas and Edwin (Ann) VonHeeder of Plains, Montana; daughter, Alice (Don) Holmes of Elm Creek, Nebraska; sister, Mabel Braun of Atkinson, Nebraska; sister-in-law, Naomi Polen of Fremont, Nebraska; twelve grandchildren, 28 great-grandchildren and 15 great-great-grandchildren; along with nieces, nephews and a host of friends. Funeral Services were held on Friday, August 23, 2013 at Hoch Funeral Home in Ainsworth with Stanley Morrison, Darla Fisher and Barbara Jacobs officiating at the services. Special music was provided by Becky Smith. The Selections "The Saviour With Me" and "More About Jesus" were sung at the services along with the Cemetery Selection of "When Life Is Ended." Casketbearers were: All of Margie's Grandchildren. Interment was held at the Mt. Hope Cemetery in Springview, Nebraska. Memorials were suggested to the Ainsworth Senior Center or to the Springview Volunteer Fire Department.

OBITUARY FOR MARGIE ANN VONHEEDER Margie Ann Polen was born July 1, 1916 to Harry and Ida (Shelbourn) Polen near Sparks, Nebraska. She passed away August 20, 2013 at Mother Hull Home in Kearney, Nebraska at the age of 97 years, one month and... View Obituary & Service Information

The family of Mrs Margie Ann (Polen) VonHeeder created this Life Tributes page to make it easy to share your memories.