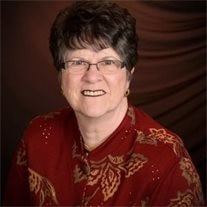 Margie Theresa (Denny) Cosgrove died on March 17, 2018 at the Rock County Hospital Long Term Care in Bassett, Nebraska after losing her battle with cancer at the age of 73 years. Margie was born on August 20, 1944 to Cecil and Erma (Sass) Denny in O'Neill, Nebraska. She graduated from Long Pine High School in 1962 and went on to earn her Cosmetology Degree in Kearney, Nebraska. While she was waiting to take her state boards to obtain her license, she met her future husband, Tom. After passing her boards, she worked in Ainsworth, Nebraska as a Cosmetologist. Tom and Margie were married on September 27, 1965 in Long Pine, Nebraska. To their union one son was born, Chad. Margie spent many years helping on the ranch. Later on, she was employed as a Dental Assistant in Bassett. Margie enjoyed watching her grandson grow, cooking and collecting recipes, crocheting, knitting, game shows, being active at Holy Cross Catholic Church and with the Twilight Belles. Margie was preceded in death by her parents; a sister, Ginger and brother-in-laws, Gary Kelly and Harold Allen. Margie is survived by her husband, Tom Cosgrove of Bassett, son, Chad and his wife, Amy Cosgrove and one grandson, Thomas all of Lincoln, Nebraska. Sister, Judy Frew of Ainsworth, brother and sister-in-law, Gerald and Theresa Denny of Long Pine, sister and brother-in-law, Cathy and Glen Cole of Long Pine, brother-in-law and sister-in-law, Dick and Katy Cosgrove of Omaha and sister-in-law, Margaret Allen of Houston, Texas and numerous nieces and nephews and other family members. Memorial Service was held on Wednesday, March 21, 2018 at the Holy Cross Catholic Church at Bassett, Nebraska with Father Phil Flott serving as Celebrant. Committal Services followed in the Bassett Memorial Park Cemetery. Music was provided by Trudy Nolles with the congregation singing the selections, "Here I Am Lord," "I Am The Bread Of Life," "One Bread, One Body" and "On Eagle's Wings." Honorary Bearers were: Members of the Twilight Belles Club. Memorials were suggested to Sandhills Cancer Fund Inc., the American Cancer Society or to Holy Cross Catholic Church. A Rosary Prayer Service was held Tuesday evening at the Catholic Church.

Margie Theresa (Denny) Cosgrove died on March 17, 2018 at the Rock County Hospital Long Term Care in Bassett, Nebraska after losing her battle with cancer at the age of 73 years. Margie was born on August 20, 1944 to Cecil and Erma (Sass) Denny... View Obituary & Service Information

The family of Mrs. Margie T. (Denny) Cosgrove created this Life Tributes page to make it easy to share your memories.