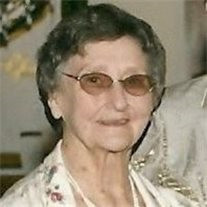 Margaret Ann (Kurtz) Clapper was born May 26, 1919, to Lester W. and Bertha F. (Miller) Kurtz in Long Pine, Nebraska. The second of five girls, she attended Long Pine Schools and graduated in 1937. Upon graduation, she attended Norfolk College of Business in Norfolk, Nebraska. Upon completion of her studies she worked for Shaneyfelt Law Firm in Long Pine before accepting a position in Washington DC as a clerk stenographer with the Department of the Navy. On January 10, 1943, she married Ted Clapper of Ainsworth at her family home in Long Pine. They moved to Fresno, California and in March of 1943 Ted deployed to the S.W. Theatre Pacific Theatre. In December of 1943 the first of their five children was born, and upon Ted's return to the states in July of 1944, he accepted employment with the USDA. The family had several moves before returning "home" to Ainsworth in 1968, where Margaret continued to live after Ted passed away in 1997. In March of 2013, Margaret moved to Cottonwood Villa where she resided until entering the Brown County Hospital the end of June. Margaret was dismissed from the Brown County Hospital and then moved into the Ainsworth Care Center where she passed from this life on July 5, 2013, with her loving family close at hand. Margaret was more than a loving wife and Mother; she was the cornerstone of her family. Always there with her gentle wit and encouraging words, reminding her children to face life's difficulties with determination and integrity. She was preceded in death by her husband Ted; her parents, Lester and Bertha Kurtz; her sisters; Gertrude Hollopeter, Lois Cooner, Francina Clapper, and a grandson Mason Bernhardt. She leaves to mourn her passing, her five children; Margaret "Tedi" Carlson (Gary), of Lake Elmo, MN; Kip Clapper (Sandy) of Anchorage, AK; David Clapper (Sandy) of Omaha; Elaine Bernhardt (Ron) of Giltner, NE and Audrey Kramer (Ken) of Ainsworth. Twelve grandchildren, Fifteen Great Grandchildren; Sister, Ruth Luehrs of Long Pine, NE and many nieces, nephews and countless friends. A Celebration of Margaret's life was held on Friday, July 12, 2013 at the Zion Lutheran Church in Ainsworth, with Pastor Georg Williams officiating over the service. Betty Bower was the organist. Congregational selections of "What A Friend We Have In Jesus" "The Old Rugged Cross" and "Amazing Grace" were provided. Pallbearers were, Ken Kramer, Douglas Carlson, Andrew Clapper, Jason Clapper, Mark Kulvich and Jason Kruse. Honorary bearers were, Joe Bernardt, Andrew Ferris, Terry Haite and Sean Clapper. Burial was at the Ainsworth Cemetery. Hoch Funeral Home of Ainsworth was in charge of the arrangements. Memorials were to be made to Clapper Family Trust, in care of Michael Clapper or the Zion Lutheran Church.

The family of Mrs. Margaret A. (Kurtz) Clapper created this Life Tributes page to make it easy to share your memories.