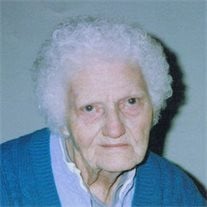 Margaret Evelyn Dugger was born February 22, 1919, to Grover and Edna (Sandall) Eastman in Rock County, Nebraska. She died at the West Holt Memorial Hospital in Atkinson, Nebraska, on November 20, 2016. She attended country schools and graduated from Rock County High School in 1938. Margaret married James Dugger on June 29, 1940. To this union two daughters were born, Joyce and Marjorie. She has two grandsons, Todd and Tony Stahl. Until her health declined, Margaret was an active member of the United Methodist Women's Society, Rebecca Lodge, Golden Age and Lady's Country Club and events at the Rock County Senior Center. Margaret was a life long resident of Rock County. She enjoyed playing cards, bingo and talking to friends. Margaret made sure no one ever left her table hungry and that every kind of any age always had cookies or candy when they came to see her. Margaret is survived by her two daughters, Joyce Stahl and Margie Dugger, along with grandsons, Todd and Tony Stahl, all of Bassett; brother, Don Eastman and wife Elaine, of Newport, Nebraska; along with nieces and nephews. She is preceded in death by husband, James Dugger; parents, Grover and Edna Eastman; and brothers, Charles and Earl Eastman. Funeral services were held at the United Methodist Church at Bassett, Nebraska with Pastor Rod Heilbrun officiating the service. Music was provided by JoAnn Swanson and Stanley Larson. Special music selections of "How Great Thou Art" and "In The Garden" were provided. Pallbearers were, Bill Dugger, D.D. Dugger, Merv Buoy, Glen May, Steve Dugger, Monte Strelow and Glenn Lee Fox. Honorary bearers were, DeLane May, Larry May, and all of Margaret's other friends and neighbors. Hoch Funeral Home of Bassett was in charge of the arrangements. Memorials were suggested to the Rock County Senior Center or to the Bassett United Methodist Church.

The family of Margaret E. (Eastman) Dugger created this Life Tributes page to make it easy to share your memories.