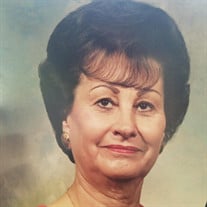 Margaret Ellen “Marg” (Hollopeter) Kinney was born on July 21, 1935 in Ainsworth, Nebraska to John J. and Mildred A. (Belcher) Hollopeter of Elsmere, Nebraska. She had one sister, Betty and two brothers, Bill and Dewey. Marg resided on the family ranch until she began high school. While in high school, she was hired on as a switchboard operator at the Bell Telephone Company. Marg continued to work there after marriage. She married Richard M. Kinney, son of Florence M. Kinney and Edward R. Kinney of Ainsworth, on August 21, 1953 in Ainsworth. To this union four children were born. They lived on the home ranch southwest of Ainsworth until purchasing half interest of Bassett Livestock Auction (BLA). They moved to Bassett in 1962. Marg and her husband sold their interest in BLA and retired in 2001. She was an active board member for the Rock County Hospital for several years. She attended Bassett United Methodist Church and was on the committee of the United Methodist Women. In her free time, she enjoyed playing cards, gardening, gambling, and cooking. During retirement, she enjoyed numerous cruises and other extensive traveling adventures with her husband and friends. Marg was preceded in death by her parents, brothers Dewey and Bill Hollopeter; and a sister Betty and husband Neil Fernau. She is survived by her husband, Richard of Bassett; daughters Jeri (Bim) Nelson of Long Pine, Nebraska and Patti (Johnny) McConnell of Tucson, Arizona; and sons Michael (Michele) Kinney of Bryan, Texas and Bill (Sandi) Kinney of Kaysville, Utah; one sister-in-law, Avis Hollopeter of Titusville, Florida; ten grandkids; numerous great grandkids; nieces, nephews along with other family members. Due to COVID pandemic, a Private Family Funeral Service was held on Thursday, January 7, 2021 at the United Methodist Church in Bassett with Pastor Jenice Epp officiating at the event. Special remarks were giving by Mike Kinney. Music was provided by Faye Smith with the CD Selections of “Amazing Grace,” ‘Go Rest High On That Mountain” and “The Old Rugged Cross” being played. Casketbearers were: Kelby Nelson, Shawn Nelson, Matt Severson, Jim Ward, Jason Tracy, David Cox and Pat Kinney. Honorary Casketbearers were: All of Marg’s Other Family & Friends. A Public Graveside Service followed in the afternoon in the Bassett Memorial Cemetery. In lieu of flowers, memorials were to be made to the United Methodist Church, the Rock County Hospital or to the donor’s choice in Marg’s name. Hoch Funeral Home of Bassett was in charge of arrangements.

Margaret Ellen &#8220;Marg&#8221; (Hollopeter) Kinney was born on July 21, 1935 in Ainsworth, Nebraska to John J. and Mildred A. (Belcher) Hollopeter of Elsmere, Nebraska. She had one sister, Betty and two brothers, Bill and Dewey. Marg resided... View Obituary & Service Information

The family of Margaret E. "Marg" (Hollopeter) Kinney created this Life Tributes page to make it easy to share your memories.