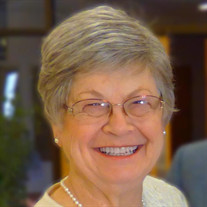 Marenna was born on December 5, 1939 at Brunswick, NE to Leo and Hyacinth (Nothem) Shaffer. She was the first girl and second child of six. She attended St. Ledgers Academy at Creighton, NE and graduated in May 1959. On November 11, 1959 she married Harold Theis of Plainview, NE. Harold died December 25, 2010 after 51 years of marriage. They were blessed with four children: Susan, Jill, David, and Tom. Harold and Marenna were long time owners of H & R Food Center. Marenna was an active member of St. Pius X Catholic Church. She held office in the Alter society, was a Lector, Eucharistic minister, and in the choir. She taught religious education for over 15 years. She was on the library board and was a member of the ABC Club and volunteered as a Pink Lady at the hospital and the thrift store. She loved reading, bridge, golfing, and knitting. Poetry, short story writing and painting were her favorite past times. She was an avid Husker fan. Her three grandchildren, Jon, Amanda, and Hailey were her delight. On January 2, 2019 she was blessed to marry Jack Raymond. They fully enjoyed their time together dancing, playing cribbage, and driving through the Sandhills pastures. She is preceded in death by her parents; husband, Harold; Brother Larry; and daughter, Susan. She is survived by her husband Jack Raymond of Ainsworth; daughter Jill McBride and husband Dennis of Ainsworth; sons David Theis and wife Rhonda of Ainsworth, and Tom Theis and wife Pam of Johnstown; three grandchildren; step-sons Chris Raymond and wife Wanda of Ainsworth, John Raymond of Ainsworth, and Jim Raymond of Ainsworth; step-daughters Patty Finney and husband Chris of Ainsworth, and Pam Raymond of Bassett; nine step-grandchildren; brothers Jon Shaffer and wife Joyce of Grand Island, Gene Shaffer and wife Pat of Creighton, and Mike Shaffer and wife Julane of Plainview; sister Ann Wortman and husband Warren of Creighton; sister-in-law Fran Shaffer of Niobrara; In-laws Marvin and Barb Theis of Creighton and Bob Theis of Fremont; nieces, nephews and other family members. Marenna (Roni) Rose Shaffer Theis-Raymond passed away in her home on March 21, 2020. A private graveside service was held on Wednesday, March 25, at the Ainsworth Cemetery under the direction of the Hoch Funeral Home of Ainsworth. A Celebration of Life Mass was held on Friday, June 19, 2020 at the St. Pius X Catholic Church in Ainsworth with Father Mike Wetovick officiating. Music was provided by Drew Klatt and Nichole Flynn, with the congregation singing, “On Eagle’s Wings”, "How Great Thou Art" and "When Irish Eyes Are Smiling." In lieu of flowers, memorials have been suggested to the family for future designation.

Marenna was born on December 5, 1939 at Brunswick, NE to Leo and Hyacinth (Nothem) Shaffer. She was the first girl and second child of six. She attended St. Ledgers Academy at Creighton, NE and graduated in May 1959. On November 11, 1959 she... View Obituary & Service Information

A MEMORIAL MASS AND SERVICE WILL BE HELD AT A LATER DATE.