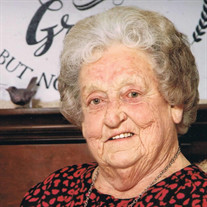 Marcella Mae (Mundorf) Maurer was born December 27, 1936, to James D. and Lorena M. (Fernau) Mundorf in Ainsworth, Nebraska. She joined brother Delbert, and later two younger brothers, Dale and Dwayne “Wink” joined the family. She attended school in Brown County. Marcella or “Mouse” as many of us knew her married Jake J. Maurer on June 11, 1955 in Bassett, Nebraska. They made their first home on the ranch living next door in a small house to Jake’s Mom, Alice Maurer. In 1958, Alice moved into Bassett, and Jake and Marcella moved into the main house. Born to this union were four children; Janice, Susan, Jake E., and Jeanie. Marcella was Jake's "right hand man", whenever he needed it. She was a hard worker, planted a huge garden, and was not afraid of any chores or anything, except mice. In the summers, Marcella cooked for a large hay crew. In the earlier years, her two younger brothers lived with them while working in the hay field. She also worked many years in the office on sale day at Bassett Livestock Auction. Auction was in Jake’s blood, and she traveled with him up and down many county roads as they ran an auction business for several years, making many new friends. In 1989, Jake and Marcella retired and moved into Long Pine, Nebraska leaving Jake E., to take over the ranch. They spent their spare time taking trips to the ranch, caring for a garden, camping, fishing, and enjoying time with their kids and grandkids. Even though she said it was A LOT of work she would pack up and go camping and fishing when Jake had the time to go and many wonderful memories were made with family and friends. Jake passed away in 1999, and Marcella later made the decision to move to Bassett. She purchased a lovely home that was her pride and joy. She collected Hull pottery over the years, and had it displayed throughout her home. The great grandkids and neighbor kids enjoyed golf cart rides with her in the summer and she usually had a bag of Tootsie Roll Pops to share with the kids. She would bring the little tykes back to their parents a little stickier than when they left. She loved thrift stores, and took great pleasure in finding “the perfect gag gift” for her family at Christmas time. In the fall of 2016, Marcella moved into Rock County Long Term Care where she became somewhat of a “care-giver” herself by looking after the other residents. She had her electric scooter and was always on the move. Grandma enjoyed giving the great-grand kids scooter rides when they came to visit. She continued gardening at Long Term Care with a beautiful garden of flowers and vegetables for the residents and visitors to enjoy. Marcella was preceded in death by her parents; Lorena (Barta) and James Mundorf, husband, Jake, daughter, Jeanie Shankland, infant granddaughter, and brothers, Delbert Mundorf and Dale Mundorf. She is survived by daughter, Janice and husband Harold of Bassett; daughter, Susan and husband J.D. of Ainsworth; son, Jake E. and wife Tiffani Maurer of Bassett, and son-in-law, Gary Shankland of Bassett; thirteen grandkids and sixteen great- grandkids (with #17 baby Hoover due soon); brother Dwayne “Wink” Mundorf and wife Patsy of Omaha. Nebraska; sisters-in-law, Donna Mundorf of Long Pine, and Elsie Mundorf of Valentine, Nebraska; brother’s and sister’s in-law, Bob and LaNita Maurer of Columbus, Montana and Jerry and Cheryl Maurer of Henderson, Nevada, along with numerous nieces, nephews, and a host of other family and friends. Funeral Services were held on August 3, 2018 at the St. Peter Lutheran Church in Bassett, Nebraska with Nancy Moore PMA officiating the service. Music was provided by Faye Smith and Georg Williams, with special selections of “Old Rugged Cross” and “Amazing Grace.” A CD selection of “Jealous Of The Angels” by Donna Taggart was also provided. Casket bearers were, Trent Kinney, Whitten Hoover, Tory Devall, Jacob Maurer, Jerod Lutter, and Payton Shankland. Honorary bearers were, all of Mouse’s other grandchildren, and great-grandchildren. Burial followed in the Bassett Memorial Park Cemetery. Hoch Funeral Home of Bassett was in charge of the arrangements. In lieu of flowers, memorials were suggested to the Rock County Hospital Long Term Care or to the St. Peter Lutheran Church in Bassett.

The family of Mrs. Marcella M. (Mundorf) Maurer created this Life Tributes page to make it easy to share your memories.