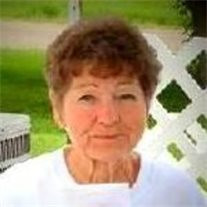 Marcella Kay (Dillon) Bartlett was born in Ainsworth, Nebraska on June 17, 1943, the fifth child of ten, five minutes after her twin sister, to Jonas Sr. and Ortha (Rix) Dillon. She passed away January 31, 2013 at the age of 69 years at the Rock County Hospital in Bassett. Marcella grew up on a farm in Keya Paha County, where she attended school graduating with the class of 1962 in Springview. She was always noted for her artistic abilities. After graduation she attended a Business College in Omaha NE, where she boarded with a family taking care of the children to pay her way through college. Upon returning to this area she married the love of her life, Vonald Ray Bartlett (also a twin), on April 29, 1963. To this union one child Lori Lee was born on October 18, 1964. Marcella worked at a variety of jobs throughout her lifetime as a secretary, telephone operator, EMT, and a nurse aide. One of her most cherished accomplishments was receiving the "Kind Caring Award." She will always be remembered for her work ethics, and her caring and compassionate nature of always helping others. Marcella loved working in her garden where she always felt close to nature and God. She loved growing beautiful flowers and vegetables in her garden and sharing her produce, flower seeds, and bulbs with others. She spent many hours canning and sharing what she grew with her family and friends. She always had a kind word for everyone and would be quick with a hug. Marcella was preceded in death by her parents, sister Frankie, and brother Larry. Those left to mourn her passing are husband, Vonald of Bassett, Nebraska; daughter, Lori Lissolo and husband Todd, of Hugoton, Kansas; granddaughters Lacey Kurts and husband Trent, Lindsey Lissolo, along with one Grandson, Colten Lissolo and one Great-Granddaughter, Madison Kurts all of Hugoton, Kansas; brothers, Jack Dillon of Springview, Nebraska, Jerry Dillon and wife Nona of Janesville, Wisconsin, Jonas Dillon and wife Carolyn of Bassett, Nebraska; sisters, (twin) Luella Zahradnicek and husband Eddie of Long Pine, Nebraska, Barbara Hempel of Bassett, Judy Hulshizer and husband Orven of Milton, Florida, Milinda Turpin and husband Ken of Newport, Nebraska; brother and sister-in-laws, Denny and Marie Bartlett of Lakewood Colorado, Vada and Dave Haumann of Thedford, Nebraska, Loice and Mary Bartlett of Chadron, Nebraska, Dean and Emily Bartlett of David City, Nebraska, Vivian Sharp of Muscatine Iowa, Vernal Densberger of Shamrock, Texas, and Norma Bartlett of Valentine, Nebraska, Helen Bartlett of Bassett, Nebraska, and Harry Sawle of Ainsworth, Nebraska. She also leaves a host of nieces and nephews and many friends. Memorial services were held on February 9, 2013 at the Emmanuel Community Church in Bassett, Nebraska, with Pastor Dennis Quigley officiating over the service. Music was provided by Ellen Carpenter, along with congregational selections of "In The Garden" and "Amazing Grace." Inurnment will be held at a later date. Arrangements were handled through Hoch Funeral Home of Bassett, Nebraska.

Marcella Kay (Dillon) Bartlett was born in Ainsworth, Nebraska on June 17, 1943, the fifth child of ten, five minutes after her twin sister, to Jonas Sr. and Ortha (Rix) Dillon. She passed away January 31, 2013 at the age of 69 years at the... View Obituary & Service Information

The family of Marcella K. "Mick" (Dillon) Bartlett created this Life Tributes page to make it easy to share your memories.