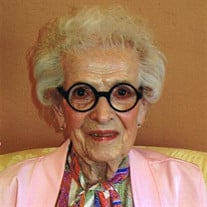 Magdalena "Madeline" Schmidt Snell passed away peacefully at her home in Ainsworth, Nebraska on March 21, 2019, just six days after celebrating her 103rd birthday. Madeline was the youngest of nine children born to Adam Schmidt and Maria Elizabeth (Kautz) Schmidt in Dallas, South Dakota. Her parents were of German ancestry and were first generation immigrants from Russia. Madeline attended country schools on horseback and was the oldest living graduate of Ainsworth High School. In the 1940's she won the title of Miss Brown County. Madeline married William Stanley “Stan” Morris, a Cherry County rancher, and to this union one daughter was born. She married Dr. W. D. “Bill” Lear in 1953 and enjoyed five years with her soul mate until his untimely death in 1958. She married Milo “Mike” Snell and they owned the Master Mart in Norfolk until retirement. She then became a "snowbird" and spent the winters in Arizona with her daughter and loved her summers at "Maddie's Cottage" at Long Pine Hidden Paradise. Madeline was an avid bridge player and continued playing into her late nineties until her eyesight worsened. She was a fabulous cook and a superb gardener. Her tomatoes were legendary. She loved to fish and was an accomplished fly fisherman. Cornhusker football was a major focus whether listening, watching or attending games; talking was not allowed during play by play. But most of all she was the best mother and stepmother there could be. Known for her positive attitude and always seeing the cup “half full” may have added to her verve for life. She belonged to the P.E.O. Sisterhood, DOES, Legion Auxiliary, and the Congregational United Church of Christ. Madeline is predeceased by her parents, all of her siblings and spouses, as well as well as one stepson. She is survived by her daughter, Janet Turner of Ainsworth and Arizona, stepdaughter Karen Snell Sorensen of Omaha, Nebraska and John Snell (Mary) of Palm Bay, Florida in addition to step grandchildren and great-grandchildren, cousins, nieces and nephews. Memorial Services were held on March 27, 2019 at the Congregational United Church of Christ in Ainsworth. Dan Woods officiated the service. Music was provided by Drew Klatt. Congregational selections were, “How Great Thou Art,” “Rock of Ages,” “I Am the Bread of Life,” and “God Will Take Care of You.” The Eulogy was given by Jan Turner, and special readings were by Carolyn Butterfield and Myrna Jakob. Inurnment followed at the Ainsworth Cemetery. Hoch Funeral Home of Ainsworth was in charge of the arrangements. In lieu of flowers, memorials are requested and may be given in her honor to either: The First Congregational United Church of Christ (236 W. 3rd Street, Ainsworth, Nebraska 69210), the Ainsworth Senior Center, (234 W. 2nd Street Ainsworth), Live-Love-Wag Pet Rescue (144 N. Maple, Ainsworth) or to the Brown County Foundation (POB 323, Ainsworth).

The family of Mrs. Magdalena S. "Madeline" Snell created this Life Tributes page to make it easy to share your memories.