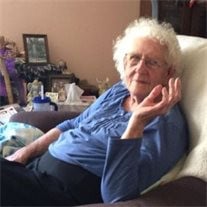 Mabel Mildred Hespe was born February 1, 1921 in Council Bluffs, Iowa to Riley A. McIntosh and Florence M. Pruett. She passed away on February 1, 2018 at the age of 97 at her home in Burton, Nebraska. She accepted Jesus as her Savior at the age of eleven and was baptized in the Missouri River at the age of twelve. In 1934 the family moved from Iowa to a farm near Wewela, South Dakota. She worked for WPA as a young woman. On May 16, 1942 she was united in marriage to Gustave A Hespe. To this union nine children were born. They lived their lives farming and ranching in Keya Paha County until 1965 when they moved to Burton, Nebraska. Mabel was a member of the Burton Assembly of God Church. She continued being involved in the Mills Missionary Circle where she had many friends. Mabel worked hard raising her family, not only in the house but milking cows, gardening, and all that goes with it. She loved her flower beds and cardinals. She enjoyed keeping the birds fed. Her greatest love was her Heavenly Father, her husband, Gus, and her family and friends. She was greatly blessed whenever family was able to be home for visits. Our yearly camp outs were special and she was a dedicated camper until the past 4 years when the camp outs were held in her backyard to make them more comfortable for her. Mabel was preceded in death by her parents, four sisters, seven brothers, her husband, Gus, son, Calvin, two grandchildren, one great-grandchild and one great, great- grandchild. Mabel is survived by eight children, Donna Basgall of Salina, Kansas, Larry Hespe (Dixie) of Springview, Nebraska, Loretta Hespe of Webster City, Iowa, Mavis Schuman (Dick) of Salina, Kansas, Dennis Hespe (Romona) of Spencer, Nebraska, David Hespe (Cora) of Naper, Nebraska, Roger Hespe (Robin) of Newcastle, Wyoming, and Daniel Hespe of the home, 27 grandchildren, 73 great-grandchildren and 14 great-great-grandchildren, many nieces and nephews. Mabel will be greatly missed by her large family and friends. Her family thanks God for her dedication. Her children were blessed by her steadfast, strong, kind, beautiful, and loving nature. She had a quiet nature and a beautiful soul. Funeral Services were held on February 5, 2018 at the New Hope Community Church in Springview. Pastor Jesse Meduna, and Pastor Tim Wyrick officiated the service. Congregational selections of "Old Rugged Cross" and "How Great Thou Art" were sung as well as special music being provided by Joan Theide and Orrin Thiede singing "Beyond The Sunset" and Taylor and Caitlin Hespe singing the selections of "Holy Hills of Heaven Call Me" and "Amazing Grace." A scripture quote was given by Anna Peery. Pallbearers were, Larry Hespe, David Hespe, Zachary Hespe, Dennis Hespe, Roger Hespe, Lance Hespe, and Daniel Hespe. Burial was held at the Mt. Hope Cemetery in Springview, under the direction of Hoch Funeral Home of Ainsworth, Nebraska. Memorials were suggested to the Springview Fire and Rescue Units, in care of Larry Hespe: Box 187 Springview, Nebraska 68778

Mabel Mildred Hespe was born February 1, 1921 in Council Bluffs, Iowa to Riley A. McIntosh and Florence M. Pruett. She passed away on February 1, 2018 at the age of 97 at her home in Burton, Nebraska. She accepted Jesus as her Savior at the... View Obituary & Service Information

The family of Mrs. Mabel M. (McIntosh) Hespe created this Life Tributes page to make it easy to share your memories.