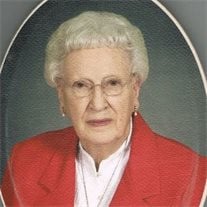 Avis Marie (Jones) Hutton was born January 12, 1924 to Clarence 0. and May (Moore) Jones at their farm near Mariaville, Nebraska. She departed this life April, 9, 2016 at the age of 92. Avis attended grade school at various rural schools in Rock County. She graduated from Rock County High School in 1941. Her high school classes included all the Normal Training courses to prepare her for the teaching profession. Her senior year she took tests offered by the State of Nebraska Department of Education which she completed successfully entitling her to teach three years before enrolling in college classes. Avis took summer and week-end classes and received her teaching degree from Chadron State College. Avis taught in many of the rural schools in Rock County. She retired from Bassett Grade School in 1989. Her career included 41 years of loving, sharing and teaching children. Avis and Floyd E. Hutton were married May 21, 1946. They resided on several ranches before moving into Bassett. After Floyd's death, Avis resided in her home until August 2015, when she became a resident of Good Samaritan Society in Atkinson, Nebraska. They had no family but enjoyed their nieces and nephews and young people in the community. Many high school students resided in their home while attending high school and they babysat for various children in the community. Dick McCall was welcomed into their home in 1961 and has been part of their family since. Avis and Floyd joined the Bassett United Methodist Church, May 18, 1975. Avis taught Sunday School, and at one time was the Sunday School Superintendent, was in charge of funeral dinners, and was a member of UMW. Avis was a member of the Kappa Kappa Iota organization. Relatives left to mourn her passing are Dick McCall, brother-in-law Donald Brown, nieces, nephews, and many friends. Avis was preceded in death by her husband, Floyd Hutton; her parents, Clarence and May Jones, and her sister Ardis Brown. Funeral services were held on April 14, 2016 at the United Methodist Church in Bassett, Nebraska. Pastor Rod Heilbrun officiated the service. Music was provided by JoAnn Swanson. Special music selections of "How Great Thou Art" and Beautiful Isle of Somewhere" were provided by Stanley Larson. Congregational selection was "In The Garden." Pallbearers were, Rod Stolcpart, Richard Keller, Monte Strelow, Jim Frizzell, Dennis Swanson, and Roger Stec. Honorary bearers were, all of Avis' friends and family. Burial followed at the Bassett Memorial Park Cemetery under the direction of Hoch Funeral Home of Bassett. In lieu of flowers, memorials were suggested to the Bassett United Methodist Church or to the Rock County Hospital.

Avis Marie (Jones) Hutton was born January 12, 1924 to Clarence 0. and May (Moore) Jones at their farm near Mariaville, Nebraska. She departed this life April, 9, 2016 at the age of 92. Avis attended grade school at various rural schools in... View Obituary & Service Information

The family of Mrs. Avis M. (Jones) Hutton created this Life Tributes page to make it easy to share your memories.