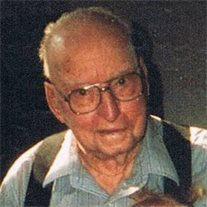 George Hipke passed away Tuesday, May 16th at the Sandhills Care Center in Ainsworth, at the age of 101. George Maurice Hipke was born Nov. 26, 1915 at Clarks, Nebraska, the third of eleven children born to Roy William and Sophia Charlotte (Zwiebel) Hipke. At a young age, his family moved to Holt County where he grew to adulthood. George and five of his brothers were called up to serve their country in the armed forces, but after the death of their father, George was allowed to return home to help his mother and brother, Reed, in running the ranch and raising the remaining children. The family moved once more to a ranch southwest of Johnstown, Nebraska. George raised Hereford cattle and continued his father's tradition of trucking. He trucked for the area ranchers, going as far as Sioux City, Iowa and Omaha, Nebraska, which was quite a feat for the trucks of the 1950's and 1960's and the road conditions of that day. At the age of 65, George married Lenora Davis Larson, a widow with three grown children. They worked side by side their remaining ranching years. After the ranch was sold, they moved to the outskirts of Ainsworth. Soon after, Lenora's health failed, and she passed away in 2005. George soon became a regular at the Senior Center for meals and card playing. In 2014, he became a resident of the Cottonwood Villa developing many close relationships with staff and residents. He continued to play cards and take rides in his pickup traveling a five county area sight-seeing, (right up past his 100th birthday.) Many of George's family took him for rides and enjoyed his knowledge of the local area. One of his special spots was to check out the feedlot north of town. He often made surprise visits to his Holt County relatives, and was a regular on Memorial Day decorating the graves of his parents and brothers, at the Atkinson Cemetery. George was preceded in death by his parents, Roy and Sophia Hipke; his wife Lenora; six brothers, Lester, Russell, Emmett (Reed), John, Neil and Gordon; one sister, Goldie Kelly; one stepson, Duane Larson. He is survived by two brothers, Dale Hipke of Tyler, Texas, and Zane Hipke of Grand Island, Nebraska; one sister, Sylvia Strong of Hallsville, Missouri; along with many nieces and nephews; stepson, Larry Larson, of Minnesota; stepdaughter, Betty, of Michigan, and several step grandchildren. Memorial services were held on Monday, May 22, 2017 at the Hoch Funeral Home in Ainsworth, Nebraska with Pastor Wayne Owens officiating the service. CD selections of "Amazing Grace" by The Statler Brothers, and "Wings of a Dove" by Ferlin Husky were provided. Honorary bearers were George's other family and friends. A private family inurnment will be held at a later date at the Cleveland Cemetery near Stuart, Nebraska. In lieu of flowers, memorials were suggested to the Ainsworth Sr. Center in his name.

George Hipke passed away Tuesday, May 16th at the Sandhills Care Center in Ainsworth, at the age of 101. George Maurice Hipke was born Nov. 26, 1915 at Clarks, Nebraska, the third of eleven children born to Roy William and Sophia Charlotte (Zwiebel)... View Obituary & Service Information

The family of Mr. George M. Hipke created this Life Tributes page to make it easy to share your memories.

George Hipke passed away Tuesday, May 16th at the Sandhills Care...