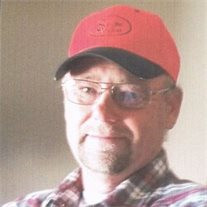 Jerry Myron Focken, was born at Atkinson, Nebraska on January 8, 1955, to Don and Beulah (Brainard) Focken. He was the third of five children. Jerry attended Kirkwood Country School north of Newport, Nebraska and later graduated from Rock County High School in 1973. On a cold night in December of 1974, he met the love of his life, Peggy Cerv at a dance in Carlock, South Dakota. It took Jerry two years to get the nerve to ask Peg to marry him and she said yes. They were married on October 29, 1976 at Bassett Nebraska. They moved south of Valentine, Nebraska where Jerry and Peggy worked on the Neil Hanna Cattle Co. Ranch for 14 years. Jerry enjoyed working for Dick Hanna, a man who is credited for teaching him how to be a perfectionist and the "ins and outs" of ranching to make Jerry the fine cattleman he was. Jerry and Peggy were soon blessed with four children. Clint was born July 23, 1977 and a year and three days later on July 26, 1978, twin girls Kristy and Kasey were born. In September of 1980, Jerry and his three kids were baptized by Pastor Stan Ostergen at Thedford, Nebraska. October 13, 1981 brought their second and final son Corey. In September of 1990, Jerry and Peggy moved to Burton Nebraska where Jerry worked for, and managed the Madeline Thiede Ranch for ten years until 2000. Jerry worked for two short years for local ranchers until July of 2002 when Jerry and Peggy had the opportunity to manage the Lazy AB Ranch for about two years. In May of 2004, Jerry and Peggy began leasing the ranch, and over the next ten years they raised and sold the finest Black Angus cattle in North Central Nebraska. In January of 2015, Jerry and Peggy were forced to retire from the cattle industry and sell the herd. They decided to semi retire and bought a small acreage northeast of Long Pine, Nebraska. This left time for traveling and spending some lazy days together. Jerry was able to fulfill a lifetime dream of his, to go fishing in Canada. He and his all time favorite fishing buddy, Curt Luther made the trip to Canada in May 2015. Jerry had a hard time "not being busy," so he and Peggy decided to go into the cedar tree removal business. He stayed busy with this during certain times of the year. He still had time for the grandkids and helping his children with jobs and tasks that required dad's special expertise and assistance. On October of 2016, Jerry and Peggy celebrated their 40th Anniversary with close family and friends. In January of 2017, Jerry had his final equipment sale and took a nice long vacation with Peg, Corey, and brother-in-law, Alan Williams, to California to visit family and site see. Shortly there after Jerry's health began to change and he was diagnosed on March 17, 2017 with a Grade 4 Glioblastoma brain tumor. As usual, Jerry chose to stand strong and fight with the support of family and friends. After four short months and a well fought fight, Jerry passed away in the Brown County Hospital at Ainsworth, Nebraska on July 17 2017, surrounded by his family. Jerry is preceded in death by his father, Don Focken; mother and father- in-law, Irene and Rudy Cerv; sisters-in-law, Lee, and Betty Williams; brother-in-law, John Thiede, and an infant grandson, Jake Crawford, Jerry is survived by his loving wife Peggy of Long Pine; children, Clint Focken (Cindy) of Burton, Nebraska, Kristy Crawford (Brandon) of Springview, Nebraska, Kasey Soles (Wayne) of Millboro, South Dakota, and Corey Focken of Ainsworth; mother, Beulah Focken of Atkinson, Nebraska; Grandchildren, Trent and Madison Focken, Cody and Connor Soles, Karleigh, Rileigh, and Ansleigh Crawford. He also leaves behind three brothers, Alvin Focken( Liz) of Sioux Falls South Dakota, Ken Focken(Jo) of Rochester Minnesota, Roger Focken (Michelle) of Lennox South Dakota, and one sister Shirley Focken Newport. He also leaves behind brothers and sisters-in-law, a score of nieces, nephews, and many friends. Funeral Services were held on July 22, 2017 at the Keya Paha High School Gymnasium at Springview, Nebraska. Pastor Bill Serr officiated the service. Music was provided by Janet Cerv. Special CD selections of "Go Rest High On That Mountain" by Vince Gill, "A Bible and a Belt" by Joey & Rory, "Amazing Grace" by the Canadian Bagpipes & American Brass, along with the congregational selection of "Just As I Am" were provided. Lori Connot presided over the guest book. Pallbearers were, Angie Painter, Brad Mundorf, Travis Mundorf, Neil Connot, Richard Thiede, and Jerry Mettler. Honorary bearers were, Cody and Connor Soles, Karleigh, Rileigh, and Ansleigh Crawford, Trent and Madison Focken. Burial followed at the Mt. Hope Cemetery at Springview, under the direction of Hoch Funeral Home of Ainsworth. Memorials were suggested to the family for a future designation.

The family of Mr. Jerry M. Focken created this Life Tributes page to make it easy to share your memories.

Jerry Myron Focken, was born at Atkinson, Nebraska on January...