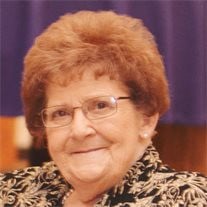 Mary Margaret "Maggie" (Strelow) Buoy was born August 16, 1935 to Louis and Kathryn (Alexander) Strelow in Rock County, Nebraska. She passed away April 25, 2016 at the Rock County Hospital in Bassett Nebraska at the age of 80 years. Margaret was the oldest of four children, Charles, Betty and Carl. She grew up in Rock County and graduated from Rock County High School. Margaret taught for five years as a rural elementary school teacher in Rock County. Margaret married Dewayne Buoy on June 27, 1958 at Bassett, Nebraska and to this union four children were born, Roxanne, Mervin, Roger and Mark. She enjoyed teaching school, being a rancher's wife and raising her children on the ranch. When she and Dewayne moved from the ranch into town, she worked at the Rock County Hospital and then as lead cook for the Rock County Public schools. Margaret loved cooking, playing cards with family and friends, sewing, crocheting and reading. However more than anything, she enjoyed being with her grandchildren and great-grandchildren. Margaret and Dewayne were married for 54 years and were inseparable throughout their lives together. Margaret is preceded in death by her parents, Louis and Kathryn; husband Dewayne; siblings Charles, Betty and Carl Strelow; parents-in-law, John H. and Phyllis Buoy, five brothers-in-law and three sisters-in-law. She is survived by her four children; Roxanne and husband, Tom of Fort Collins, Colorado, Mervin and wife, Jan of Bassett, Nebraska, Roger and wife Carol of Kearney, Nebraska, Mark and wife, Julie of North Platte, Nebraska; along with ten grandchildren and seven great-grandchildren; brother-in-law, Harry and wife Faye Buoy of Bassett; sisters-in-law, Lynn Strelow of Bassett, Sylva Dixon of Burwell, Nebraska, Elva Buoy of Long Pine, Nebraska and Kathy Buoy of Park City, Kansas; many nieces, nephews and friends. Funeral Services were held on Thursday, April 28, 2016 at St. Peter Lutheran Church in Bassett with Pastor John Brink officiating. Music was provided by Evelyn Armstrong and Stanley Larson with the vocal selections of "Old Rugged Cross" and "How Great Thou Art" being sung. A congregational selection of "Abide With Me" was also provided. Casketbearers were, Rick Buoy, Darrell Buoy, Jerry Buoy, Monte Strelow, Ed Qualley, and Bryce Buoy. Honorary Casketbearers were, All of Maggie's other family and her friends and neighbors. In lieu of flowers, memorials were suggested to the family in her name for a future designation, or to the donor's choice.

Mary Margaret "Maggie" (Strelow) Buoy was born August 16, 1935 to Louis and Kathryn (Alexander) Strelow in Rock County, Nebraska. She passed away April 25, 2016 at the Rock County Hospital in Bassett Nebraska at the age of 80 years. Margaret... View Obituary & Service Information

The family of Mrs. M. Margaret "Maggie" Buoy created this Life Tributes page to make it easy to share your memories.