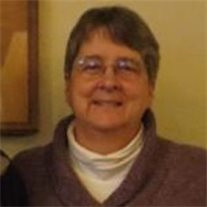 Lynne A. Heyer, age 58, of Ainsworth, Nebraska, passed away in her home on December 9, 2014 in Ainsworth. She was born April 3, 1956 to Dr. Donald and Janet Maylahn of Skokie, Illinois and joined her older brother, Michael. Lynne attended Iowa State University where she earned her Bachelor of Science degree in Dairy Science. She married Vergil Heyer, D.V.M. on August 7, 1982 in Skokie, Illinois. They lived in Coleridge, Nebraska before moving to Ainsworth in the spring of 1988.They had two children, Saige and Vance. During her time in Ainsworth, Lynne worked various jobs, her most recent being support staff at North Star, substitute teacher's aide at Ainsworth Community Schools and ESU #17 health checks. She took part in many volunteer opportunities throughout the community, including Special Olympics. She was an active member of the Zion Lutheran Church in Ainsworth. She selflessly spent much of her time helping others in any way she was able and loved to do it. Lynne is preceded in death by her parents. Survivors include her husband, Vergil of Ainsworth; daughter, Saige of Ames, Iowa; son Vance of Lincoln, Nebraska; granddaughter, Natalie, brother, Michael Maylahn of Bartlett, Illinois; parents-in-law, Vergil and Jackie Heyer of Cushing, Iowa; brothers-in-law, sisters-in-law and many other friends and family. Funeral services were held on December 12, 2014 at the Zion Lutheran Church in Ainsworth, Nebraska. Pastor Georg Williams officiated the service. Special musical selections of "God Loved The World So That He Gave", "Old Rugged Cross", "I'm But a Stranger Here", and "Away In the Manger" were offered by Pastor Georg and Georgia Williams. Pallbearers were, Steve Bartak, Jim Jackman, Kent Christensen, Richard Hurless, Brian Johnson, and Doug Pankowski. Burial was held at the Lutheran Cemetery near Ainsworth. Hoch Funeral Home of Ainsworth was in charge of the arrangements. In lieu of flowers, memorials were suggested to the Zion Lutheran Church or to the Special Olympics Program of Nebraska.

Lynne A. Heyer, age 58, of Ainsworth, Nebraska, passed away in her home on December 9, 2014 in Ainsworth. She was born April 3, 1956 to Dr. Donald and Janet Maylahn of Skokie, Illinois and joined her older brother, Michael. Lynne attended Iowa... View Obituary & Service Information

The family of Mrs. Lynne A. (Maylahn) Heyer created this Life Tributes page to make it easy to share your memories.