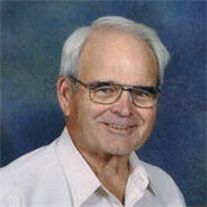 Lynn E. Moore was born on December 27, 1933 to Shelley T. "Ted" and Minnie Moore. He passed away in a tragic motor vehicle accident on Friday April 8th, 2016, near Long Pine, Nebraska. Lynn was the fourth of eight children born in Long Pine, and walked several miles to country school south of Long Pine. He graduated from Long Pine High School in 1951. Lynn met Lois Jean Doty at Camp Witness where he had also accepted Christ as his personal Savior in his youth. He and Lois were married on October 25th, 1953 in Spencer Nebraska. Lynn was drafted into the army and moved his family to San Bernardino, California. After his Military Service he attended the University of Nebraska at Lincoln, and received his Bachelor and Master of Science Degree in Electrical Engineering. He presented his Masters Thesis on Nuclear Energy having done his research at Cooper Station Nuclear Energy Facility in Brownsville, Nebraska. After graduation from college he was employed by Consumers Public Power and Nebraska Public Power District. During his career he resided in O'Neill, Lincoln, Columbus, and York, Nebraska and was always active in community service and also within his church. During his career he was appointed by Governor Thone to the State Electrical Board. After his retirement he and Lois returned to Long Pine to his beloved ranch. He served as County Commissioner for Brown County and after his wife Lois's death in 2010, he married his high school classmate and friend, Mary Lou Anderson Burns on February 2, 2012. He also served on the Northeast Nebraska Telephone Company Board, as well as being instrumental in the development of Seven Springs Water, a spring water distribution plant, where he was the Vice Chairperson of the board at the time of his death. Lynn also loved the outdoors. His pastimes included hunting, fishing and camping throughout his life. After his retirement at the ranch in Long Pine you could find him playing with his tractors, fixing and repairing whatever needed to be done to run the ranch as well as spending numerous hours cutting the noxious weed-eastern red cedar trees from his pasture. Lynn was preceded in death by his parents; wife Lois, and sisters Alice and Ila. He is survived by his wife Mary Lou, daughter Betty (Dick) Thompson, and sons, Jerry (Kim) and Myron Moore; grandchildren Traci (Ryan) Swinton, Joel (Erin) Thompson, Jonathan (Jessica) Thompson and Tyler (Rachel) Moore; nine great grandchildren and numerous nieces and nephews. Also surviving are sisters Lois Wade, Clara Belle Roundtree, Carol Birkey and Ardath Sydor, and brother, Harry (LaWanda) Moore; brother-in-law, Leland (Alice) Asa, and Stepchildren John (Nita) and Karl (Janelle) Burns. Memorial services were held at the Evangelical Free Church in Ainsworth, Nebraska with Pastor Mick Thornton and Pastor Bruce Beebout officiating the service. Music was provided by Pam and Joel Barrow. Congregational selections of "Just A Closer Walk With Thee", "Peace In The Valley" and "Come As You Are" were provided. Other special musical selections were "Leaning On The Everlasting Arms" by Mary Boehm, Rachel Busenitz and Genia Entz, "How Great Thou Art" by Kami Scott, and "When I Get Where I'm Going" by Zachary and Meaghan Entz. Special memories were shared by grandchildren. Honorary bearers were, Traci Swinton, Joel Thompson, Jonathan Thompson, Tyler Moore and all of Lynn's Great-Grandchildren. Inurnment with Military Honors being provided by members of the Long Pine American Legion and the VFW were held at the Grandview Cemetery in Long Pine. In lieu of flowers, memorials were suggested to Camp Witness or to the Evangelical Free Church. Hoch Funeral Home was in charge of the arrangements.

Lynn E. Moore was born on December 27, 1933 to Shelley T. "Ted" and Minnie Moore. He passed away in a tragic motor vehicle accident on Friday April 8th, 2016, near Long Pine, Nebraska. Lynn was the fourth of eight children born in Long Pine,... View Obituary & Service Information

The family of Mr. Lynn E. Moore created this Life Tributes page to make it easy to share your memories.